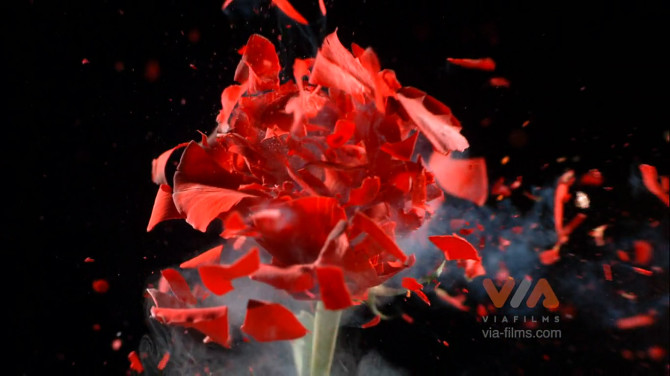 If there is one thing I can appreciate more than the beauty of a flower in full bloom, it’s watching one get blown into oblivion right in front of my eyes. As crass as that may seem, it will make complete sense once you feast your eyes on this high speed footage Daniel Hurst filmed on a Phantom HD Gold camera. Take a look as he invites us into his studio with some behind the scenes footage of the entire process.

As mentioned before, Hurst used the Phantom HD Gold to capture the split seconds it takes to explode a flower. In order to get the shattering effect Hurst was shooting for, he had to flash freeze the flowers using liquid nitrogen. He then experimented with several techniques which involved unsuccessfully trying to shoot the flowers with a slingshot and a BB gun before he finally brought out the big guns (some pun intended), a .22 caliber rifle.

Hurst is no stranger to high speed camera work as even a quick look at his demo reel reveals. The visual artist has a pretty imaginative eye when it comes to this stuff. For now, however, enjoy the juxtaposition of delicate flowers and powerful firearms in this compilation Hurst put together using footage from the exploding flowers shoot:

What would you explode and photograph if you had access to a $50k Phantom high speed camera?

« Paris Time-Lapse: The Modern Side of The Most Romantic City in the World
The Disposable Camera Astronauts Have Sent On A Suicide Mission To Capture Photos Of Burning Spacecraft »