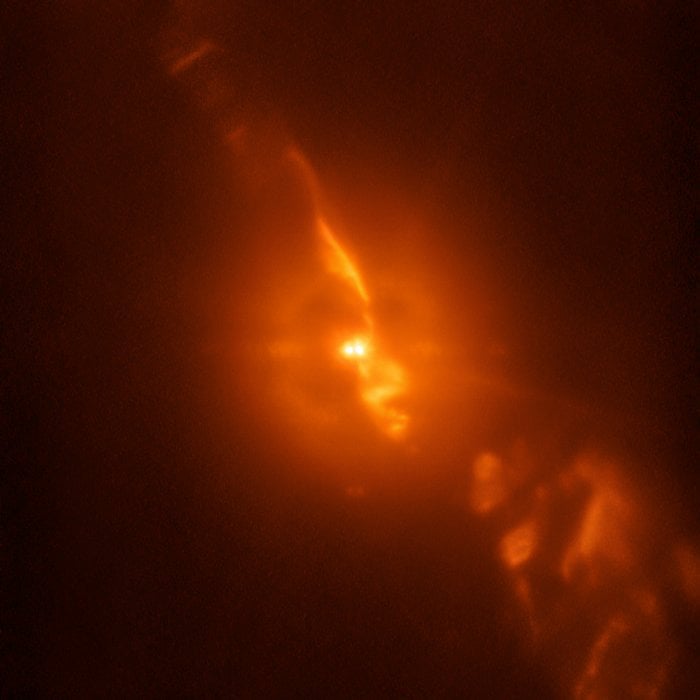 Did you know that stars can fight with each other out there in space? Thanks to this magnificent image captured by European Southern Observatory (ESO), we can see what it looks like. Located 650 light-years from Earth, these two stars were captured by ESO’s Very Large Telescope in a dramatic cosmic fight.

The image shows details of the stellar duo that makes up the binary star R Aquarii. ESO explains that most binary stars of this type have a more serene relationship driven by gravity. However, these two stars are having a dramatic fight. “The larger of the two stars, the red giant, is a type of star known as a Mira variable, ESO writes. “At the end of their life, these stars start to pulsate, becoming 1000 times as bright as the Sun as their outer envelopes expand and are cast into the interstellar void.” The smaller star is a white dwarf and it’s denser and much hotter than the red giant. In this battle to death, it’s stripping off material from the outer layers of the red giant.

Even though the distance of 650 light-years sounds tremendous, R Aquarii is actually one of the closest symbiotic binary stars to Earth. This image of the sinister dance captured by Very Large Telescope is the sharpest R Aquarii image so far, and if you ask me, it makes me think of “star wars” in a totally new way.

Create Stunning Stars In Your Eyes With a DIY Ring Light