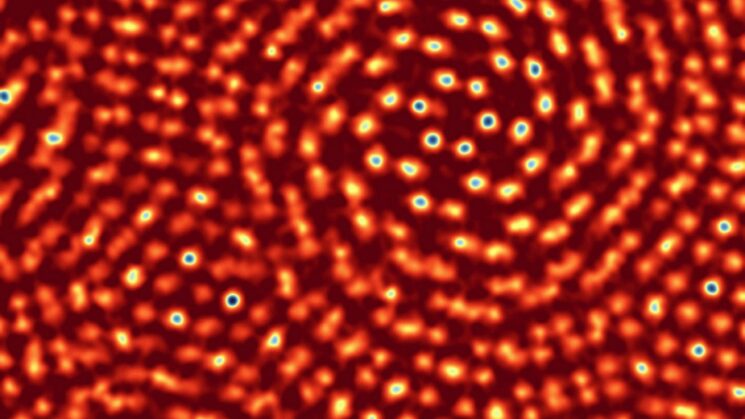 Step aside, Nikon P1000, the new king of zoom is here. It’s an electronic microscope, though, but it can zoom in 100 million times and still keep the subject clear. It’s so impressive, in fact, that it earned a spot in the Guinness World Records.

Although electron microscopes allow scientists to see individual atoms, zooming all that far will not result in a sufficiently clear image. It’s due to the aberrations in the lenses which are corrected with special aberration correctors. But the problem is that you can’t stack those correctors forever.

David Muller and Sol Gruner, physics professors of Cornell University, came up with a new approach that they first introduced back in 2018. Their electron microscope achieves high resolution using a high-powered detector and a technique called ptychography. Thanks to this technique, they could capture in sharp detail even particles that measure down to 0.39 ångströms or 0.039 nanometers (one-billionth of a meter).

“I always thought that I’d need to eat 40 hamburgers in five minutes or stand on one foot for days to get into the Guinness Book. Who would have thought that seeing a few atoms would do the trick?”

Muller compared the electronic microscope’s lenses to those for a camera.

Now, the lowest f-number on our lenses goes down to f/0.9, but “an electron microscope has the f-number of about 100. “Aberration correctors can bring that number down to about 40”, Muller added, but it’s “still not great.

With electronic microscopes, image resolution has traditionally been improved by increasing the f-number of the lens and the energy of the electron beam. Just like we need more light when closing down the aperture, the microscope needs a stronger beam to illuminate the subject.

“Atomic bonds are generally between 1 and 2 ångströms (Å) long – an ångström is 0.1 nanometers – so sub-ångström resolution would allow one to easily see individual atoms. The Muller group was able to reach a resolution of 0.39 Å – a new world record – and at a lower, less damaging beam energy where resolution from the aberration corrected lenses alone was 0.98 Å.”

« Drug dealer gets caught thanks to a photo of cheese he shared online
Lens compression is absolute nonsense – It doesn’t exist, and here’s why »