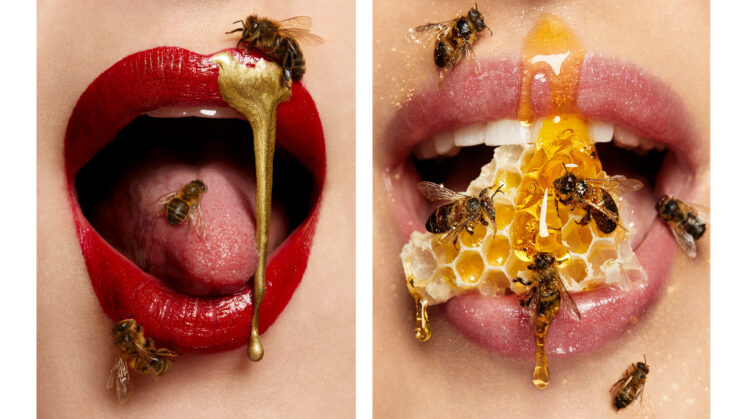 London based beauty and fashion photographer Tina Eisen is well known for her beautiful work, but these macro images of honey bees and lips are really another step beyond. Not only are they macro self-portraits, but they are REAL BEES! I had to find out from Tina how exactly she shot these spectacular images.

So of course the first question I had to ask was “are these real bees, and how did you not get stung?” Tina replied that these are in fact 100% real bees in her actual mouth with no photoshop. But they aren’t alive. She is quick to reassure me that “no bees were injured in the making of this work” but she is lucky enough to have a beekeeper in the family who regularly gives her Tupperware of deceased bees who have died of natural causes.

Bees symbolise many things for me, some of the most hard working creatures on Earth, yet undervalued by most. A symbol of strength and team work, these humble creatures keep our planet fed. I love shining a light on small beings that are often considered “creepy” and the beauty beneath the surface.

Tina says that bees have featured in her work before, blaming it on her mum who dressed her up as a bumblebee aged 3 for a photoshoot! The second part of the inspiration was of course the pandemic and suddenly finding herself without any real-life humans to photograph, other than herself.

“The boredom set in first,” Tina explains, “followed by sheer desperation to create beauty images in any way possible. I soon experimented with my face and quickly ended up shooting only macro parts like my lips.” These are indeed macro self-portraits of Tina, but before the pandemic, this was not something she had ever contemplated trying.

The process was quite complicated and took a lot of trial and error. She shoots tethered to a computer with her camera on a tripod, always with the computer in her direct line of sight so that she doesn’t have to move around too much. The shutter is triggered from an app on her phone which also shows small thumbnails of previous shots which helps immensely with posing and framing.

“Posing and focus are your main challenges with something like this,” Tina says, “I shoot into Capture One with a tool called Focus Mask turned on, it adds a green overlay onto the areas of the image that’s in focus and helps the process massively!” The other advice Tina has for anyone wishing to try something similar is to be prepared to take a lot of images before you capture anything good, and to also be prepared to see areas of your face in extreme detail that you perhaps might wish you hadn’t!

“It was just me, some dead bees and my cat,” Tina says, and one of the hardest parts was apparently keeping her inquisitive cat literally out of the picture. I absolutely adore this image that has the kitty paw getting involved, if you can’t beat ’em, join ’em as they say! 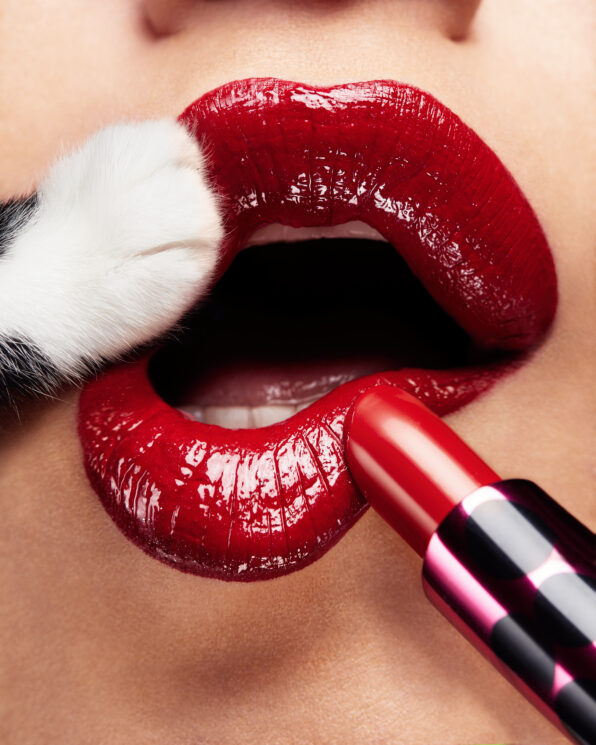 In terms of retouching, Tina says that she usually does the majority of the work herself, with the exception perhaps of repetitive bulk work with a very fast turnover. Although retouching skin can be tedious work, Tina says that she sees it as part of the creative process, always having a strong vision of the desired outcome.

When it comes to retouching details are crucial. I want to see texture, pores, tiny wrinkles. Retouching is meant to enhance, never change a subject.

This new medium has given Tina a sense of freedom and changed her creative approach and she has continued to create these macro images of her own face, even after things started opening up again. She’s currently working on larger collections and further lip commissions, so I think we will be seeing more of this type of work from her in the coming months. They really do give a whole new meaning to ‘bee-stung lips!’

These macro photos make bees look like aliens from another world

These photos of bees sleeping in flowers will melt your heart