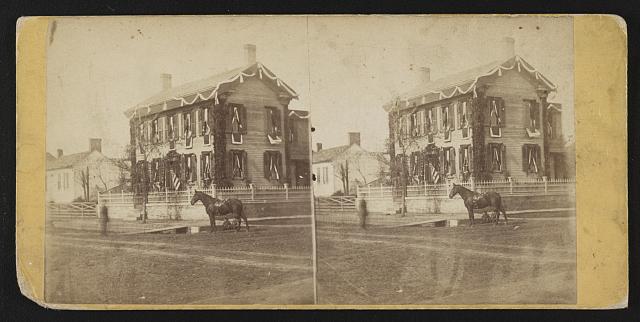 Photograph shows a street view Abraham Lincoln’s home in Springfield, Illinois draped in mourning on the day of his funeral. A horse stands near a wooden plank from the street to the sidewalk. Credit: Robin Stanford collection/Courtesy of Library of Congress.

The unique addition was acquired from an 87-year-old Texas collector, Robin Stanford, who has been gathering civil war-era photos since the 1970s.

“They’re just tremendously significant,” said Bob Zeller, president of the Center for Civil War Photography, adding that “these are not post-war . . . or after Union occupation. These are actual scenes of slavery in America”.

The photos include Lincoln’s Springfield home covered in mourning cloth after his assassination, the first generation of African Americans born into freedom and a Confederate flag flying from a flagpole in Fort Sumter.

There are also images of life before the war, with one of the more noteworthy photos depicting South Carolina slaves worshiping in a plantation church. This may be the only prewar photo of its kind, according to the Washington Post.

Most of the images are stereo photos, created by using a dual lens camera and printing the photos on a cardboard to be viewed in a stereo viewer.

Though uncommon today, this is not surprising since according to Zeller 70% of photographs during the Civil War were shot using this method:

“This was the photograph that was a viewing experience. It was more than just a keepsake for a family member. . . . To put your head under the hood of a stereo viewer and sink into the details. The mind feels its way into the very depths of the picture”.

He added that even Lincoln had a stereo viewer, which was a “mania” back in the day.

Helena Zinkham, head of the library’s prints and photographs division, called the latest addition to the already extensive collection “fantastic”, with the rarely seen Southern photos by Southern photographers being the pinnacle of it.

“We’re benefiting from [Stanford’s] 40 years of careful collecting,” she added. “We have . . . more than 7,000 original glass plate negatives from the Civil War. These are cards for which the negatives didn’t survive”.

Although the photos were sold due to a family tragedy, the timing couldn’t have been better for the library as the country’s four-year commemoration of the 150th anniversary of the 1861-1865 war ends next month.

Stanford had planned on passing on her photo collection to her son, but his sudden death last year led to her decision to sell some of her photos in order to help her daughter-in-law and grandchildren.

“I would not have sold any of it if it hadn’t been for that,” said Stanford. She later added she was glad the photos are now part of the library’s collection “because they will be available for everybody. On the other hand, I’m going to miss them”.

No need to feel too bad for Stanford, though. Even after selling these photos her collection is still estimated to include thousands of photos and even she doesn’t know how many there are.

The library announced its purchase of the photos only on Friday, though it received them already in December. Since then it has been working on digitizing them and 77 of the photos are already available online. No timeframe has been given, but the other photos will eventually be digitized as well.

The price paid for the photos was not disclosed, but Zeller estimated that some of the photos are worth over $1,000 each.

Library of Congress and 12 other institutions release over 1,600 images for public use