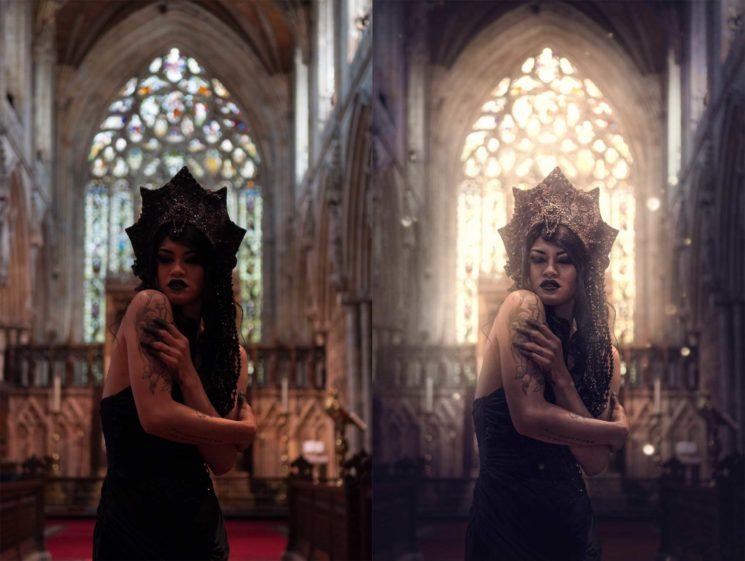 Sometimes it’s good to get out and flex the old photography muscles by shooting a little differently to how you normally would. It keeps the soul young and the stops the boredom from creeping in.

This is exactly what I did a few weeks back when I had a client shoot come in, who wanted natural light, Dark beauty themed images. I myself love flash, I pretty much always use a flash whether shooting composite or location, but I wanted to take this small challenge on. The shoot was great, I got to shoot in Selby Abbey, such a beautiful place. The thing with buildings like that though is they are usually gloomy. So natural light plus large gloomy, gothic abbey equals some ninja like editing afterward. When shooting natural light I tend to underexpose and then bring back detail later in Camera Raw. I had no choice in the abbey but to shoot dark, I even had to raise my ISO (something I hate haha) but I like a challenge now and again when editing to realize the vision in my head. SO I will walk you through the steps it took me to get to the image above.

So here is the image straight out of the camera. As you can see it is underexposed on the model, but also I had the issue of natural light from the windows above and tungsten from the lights lower down. 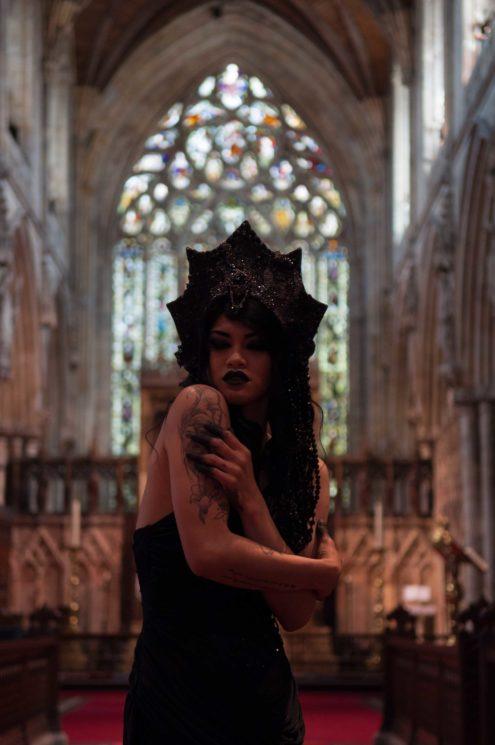 The First port of call was Camera Raw. I upped the shadows. I even pulled up the exposure a little. I brightened the darks a little and finally did some slight sharpen..natural light images can feel a little soft. 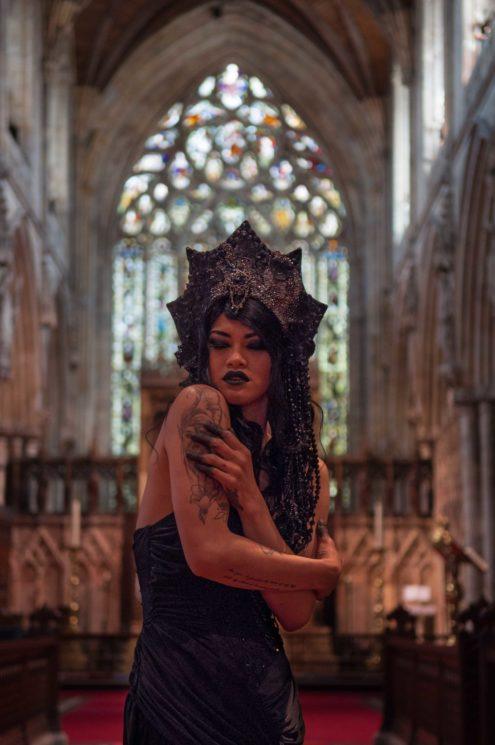 I then went straight on to dodge and burn. I used a curves adjustment layer for this like always. Sculpted the form and the face a little. 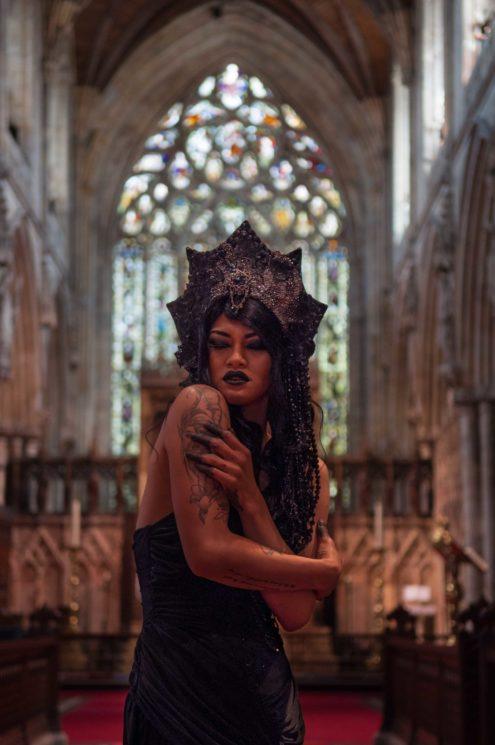 Looking at the image I could tell it looked way oversaturated for what I wanted, plus the skin looked red. I created a Hue/Saturation adjustment layer, clicked on the reds, then pulled down the saturation slider. I added a layer mask to the adjustment layer and inverted it. With a brush, I then painted over the skin selectively desaturating the red. 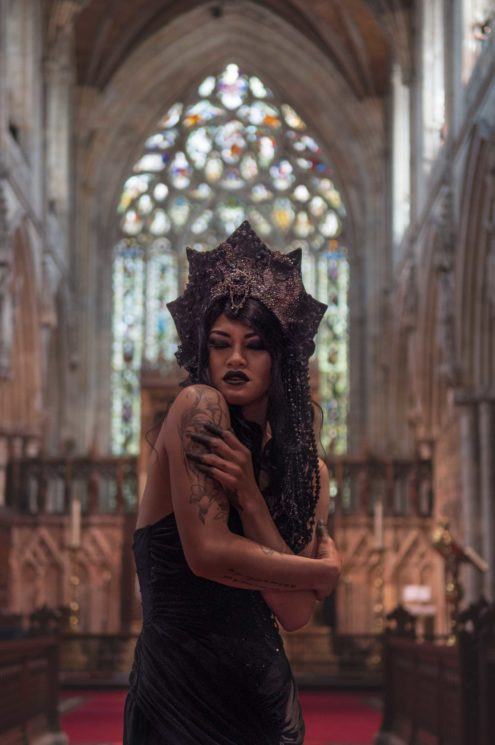 On to the background! I wanted more contrast between the model and her surroundings. One way to do this is to create more separation by lowering the contrast of the background, so the model is the greatest area of contrast. To do this I created a Curves adjustment layer and decreased the background contrast by pull up the darks a little. I then inverted the mask and painted in the adjustments around the model.

Time for a little styling. Again for to add focus to the model but add some style I decided to add some light and a little atmosphere coming from the window. Again I did this using a curves adjustment as in the last step. 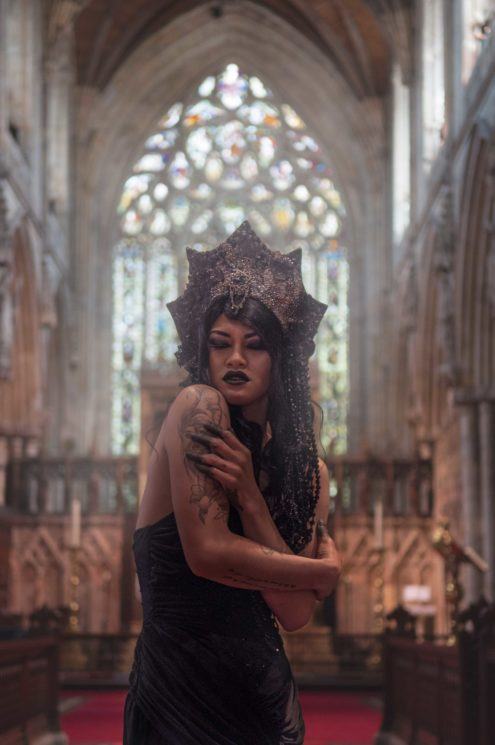 The background is looking good, but my eye was tending to leave the image at the edges. So to stop this I created a vignette to keep them towards the center of the image. I did this again by using a curves adjustment layer. I pulled down the highlights. Create a layer mask, inverted it and painted in the vignette selectively. 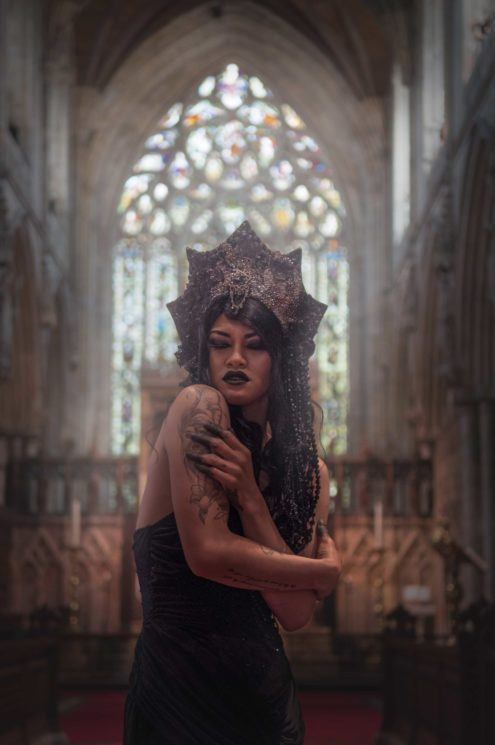 Now for more light!!! By now you should know I really like my stylized images. So one thing that really boosts that is light. So to add more light in I created a blank layer on a linear dodge blend mode. I then with a white brush on a low opacity painted in more light. Even slightly over the model to create a wrap around. 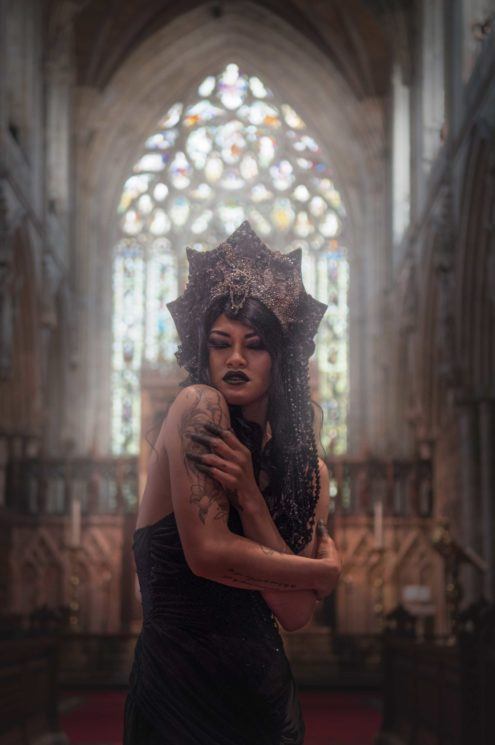 Looking good but now let’s refine the color toning. Going with the styling and the location I went for a darker toning. I used a gradient map, using blue/purple colors. I then lowered the opacity of the gradient map to around 40 percent. 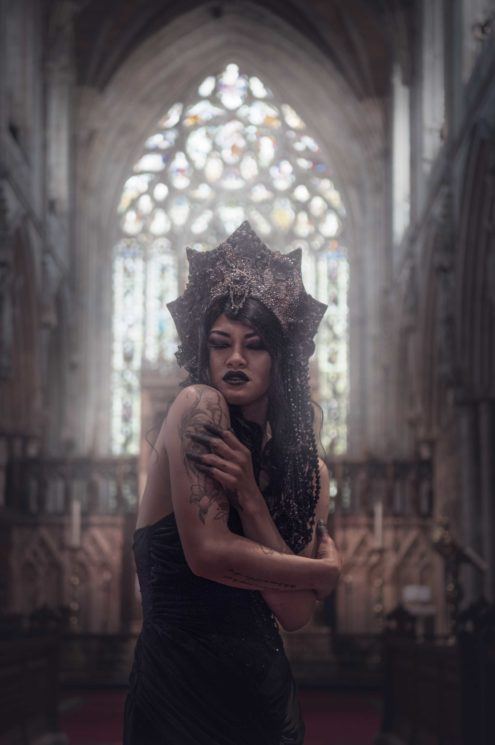 Now for some color styling. Although I liked the cool toning, my vision was that there would be a glowing light coming from the magnificent window in the background, wrapping around the model as if her faith was keeping her warm……or something to that extent. To create this light effect I create a color balance adjustment layer. I clicked on to highlights and pulled the yellow slider which turned the whites yellow. I then added a layer mask, inverted it and painted in the color with a brush. 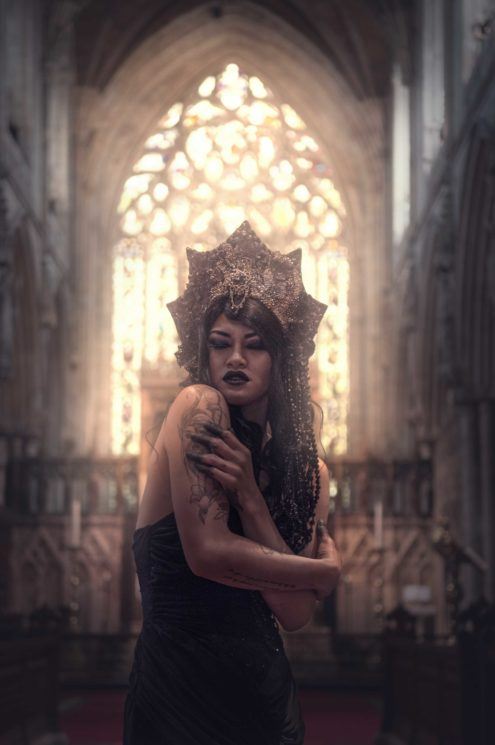 Got to add some little details in, it can finish an image off very nicely. A good way to do this is to add some textures. I added some light particles from the Raw Exchange. I simply brought in the image and switched it to a screen blend mode, which just left the particles on the screen. 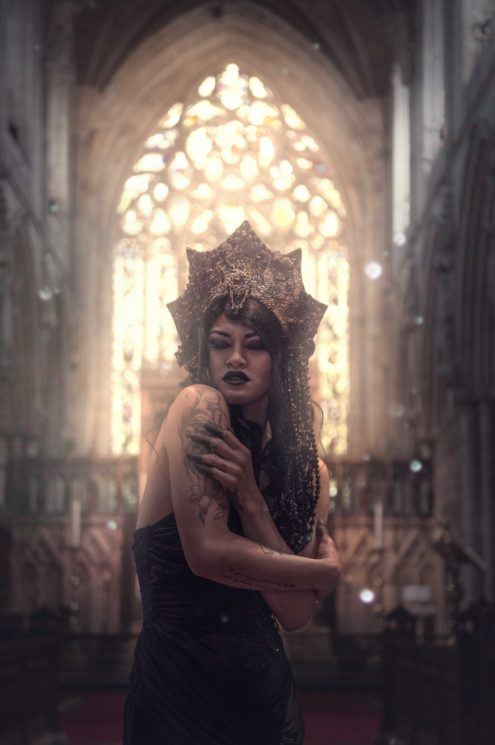 I then added a hue saturation adjustment layer, clipped it to the particles and changed the hue slider until they turned to yellow. With the move tool, I then moved them into position and using the free transform tool resized them to the size that worked for this image. 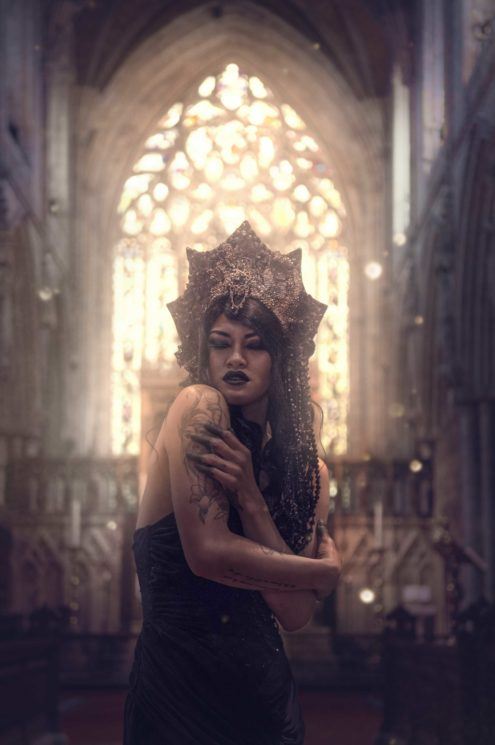 And finally, we get to the end image. All in all, this was not a very long edit. I would say it took maybe just over half an hour. One thing I do need to remind you though is it is always good to have a vision of the final image in your mind when editing. Even if it means a little thinking or planning before you even turn Photoshop on. Photography and Photoshop is all about vision. I always envision what I want before I take the image which in turn means it is easier to edit at the end. Also by knowing how you want your image to look means, you can shoot in a way that gives you a good template for editing. E.g shooting underexposed.

That’s it for this week. I hope you guys enjoyed the post, and I hope you take the time to step out of your comfort zone the results can be very surprising!

Don’t worry about blown out highlights: Sometimes it’s the right thing to do

My favorite photo (or why you should sometimes print crappy photos)