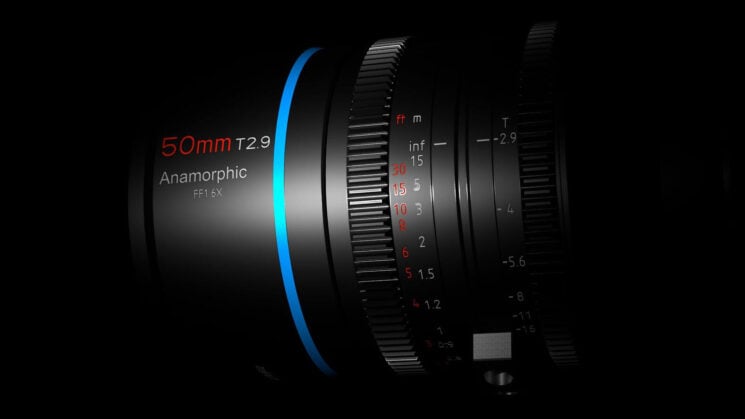 Famous for their popular APS-C anamorphic lenses, Sirui has stepped out with a new full-frame 50mm T2.9 1.6x anamorphic lens providing a 2.8:1 aspect ratio. As per usual for Sirui lenses, the new 50mm T1.9 is being launched via Indiegogo. You’d think by now they’d be in a position now to just develop a lens, announce it and put it up for sale, but I guess not.

Going up to full-frame marks a nice upgrade for Sirui and with their prices, it puts them in a fantastic position for capturing the entry-level full-frame market. With more full-frame cine cameras (and video-focused mirrorless cameras) coming onto the market at lower prices these days, it makes a lot of sense for them to step up.

The new lens is coming in a variety of mounts – all of the major full-frame mirrorless mounts, in fact – including Canon RF, Leica L, Sony E and Nikon Z mounts. This makes it compatible with cameras like the Panasonic S1H, RED Komodo, Canon EOS R5, Sony FX3, etc. When shooting 3:2, it offers a 2.4:1 aspect ratio, but when shooting 16:9 you get a significantly wider 2.8:1 aspect ratio, which Sirui says offers a viewing experience that “is as premium and immersive as the IMAX format”.

I don’t know about competing with IMAX, but it sure looks good. A number of the usual popular YouTubers have already got their hands on one and have been having a play, so naturally we’ve been flooded with first looks, reviews and footage samples from Caleb Pike, Brandon Li, Mathieu Stern, Jason Morris, Anamorphic on a Budget and Mauro Licul, amongst others.

It sure does produce a decent looking image from the sample footage shown in the videos above, and if you want to shoot some anamorphic footage on a full-frame sensor, there aren’t really many better deals out there. Right now on the Indiegogo campaign, you can back the project to get one of your own starting at $1,199. Once it eventually goes retail, it’ll be $1,499.