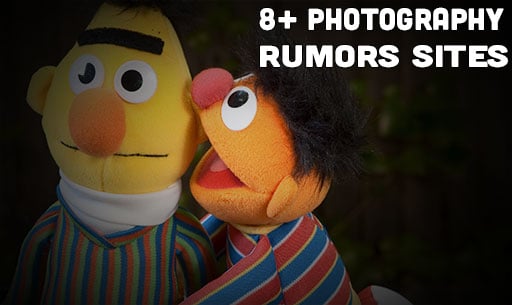 While some rumors fade away, a lot of them turn out to have a solid base and become main stream news once formally released.

Favorite quote of all sites: “This site is not affiliated with Canon/Nikon/Fuji/Sony/Olympus….”

If you want to know the future before it happens (at the risk of being totally wrong), here are the main sites that cover photography rumors.

What? Lighting rumors is a bit of a strange member of the rumors sites family, instead of being oriented towards a specific brand they are covering rumors related to lighting equipment.

Who? David A. Selby

What? coming from the same house as Fuji rumors, 4/3 rumors and Sony alpha rumors, the structure of the site is quite similar, Only this time it is mirrorless centric. Expect Panasonic GX, Olympus OM and the likes.

What? coming from the same house as Fuji rumors, Mirrorless rumors and Sony alpha rumors, the structure of the site is quite similar, Only this time it is 4/3 centric. Expect Sony Nex, Olympus PEN, Ricoh GR, Samsung NX and the likes.

What? PR hosts rumors that relate to the entire photography industry.

Who? Judging by the site structure and linking, it is probably the same guys/girls who are running the formerly mentioned Nikon Rumors.

What? I’ll let you guess this one out.

The sites above are almost 100% rumors dedicated, and are usually very centric in their coverage. In additions to those several other photography sites occasiaonly cover rumors either echoed from the sources above, or compltly original. Here is a short list: