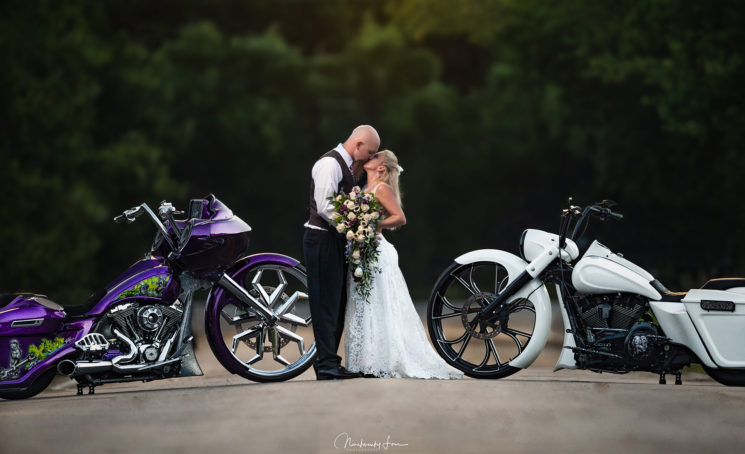 There are times when only a super long lens like a Canon 400mm f/2.8L will do, even when photographing people. And when this wedding couple wanted their custom motorcycles incorporated into the shot, photographer Keydrin Franklin knew exactly what he needed to do to make the above shot.

DIYP reached out to Keydrin to get a little more information on how the shot came about.

Going into this wedding, I didn’t know what to expect, but I knew that I wanted to pull out the Canon 400mm f/2.8 for at least one shot. Once we arrived at the wedding venue, my team and I began scoping out places to shoot with the 400mm. Knowing that I love shooting long focal lengths, I knew I needed quite a bit of space to get the shot.

A 400mm lens is a little unconventional for use at a wedding, though. They probably thought he was a little bit mad when he pulled this out of the bag, but everybody who knows Keydrin thinks he’s a little bit mad. He says he’s known the couple for a while now, so they’re probably used to his long lens antics. Keydrin mounted the Canon 400mm f/2.8L lens to his Sony A7III using the Sigma MC-11 adapter. 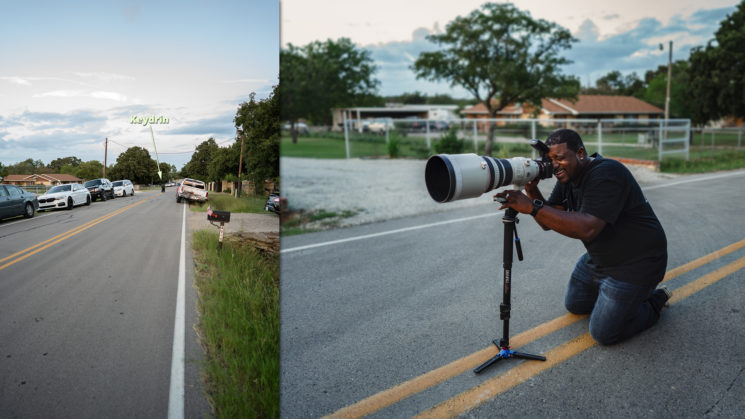 In order for me to get a majority of everything in the frame, I knew a road shot would make the most sense. Since this wedding took place in an area without a lot of traffic, I knew I would have more time to get the correct set up to capture the image I was looking for. 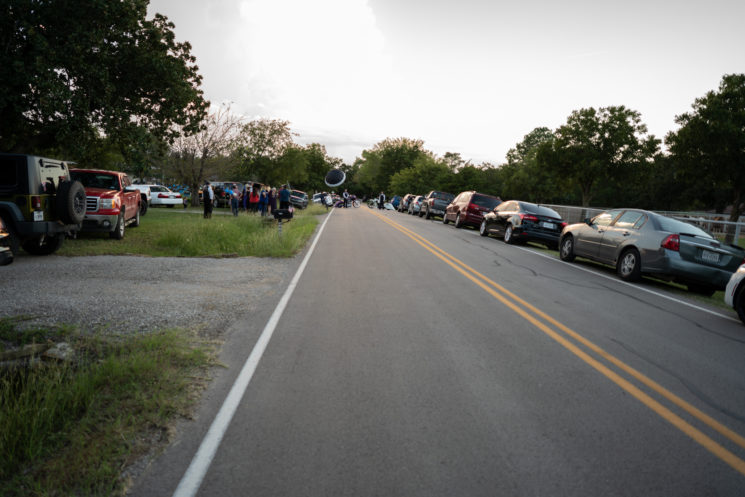 When you see the scene above, you start to realise why Keydrin went with such a long lens. Sure, he could’ve come much closer with a shorter, wider lens, but then he’d have all kinds of vehicles and blown out sky in the background. Getting back with a super long lens allows him to crop out much of that background while still getting the composition he needed on his subjects.

What became tricky with this shot was lighting the scene. The final image delivered to the client is a composite of two images. One exposed for the ambient, and a second lit by flash to highlight the subjects. To light the couple, Keydrin used a Godox AD600 Pro inside a Cheetah DP-65 65″ umbrella with diffusion triggered with the Godox XPro-S. 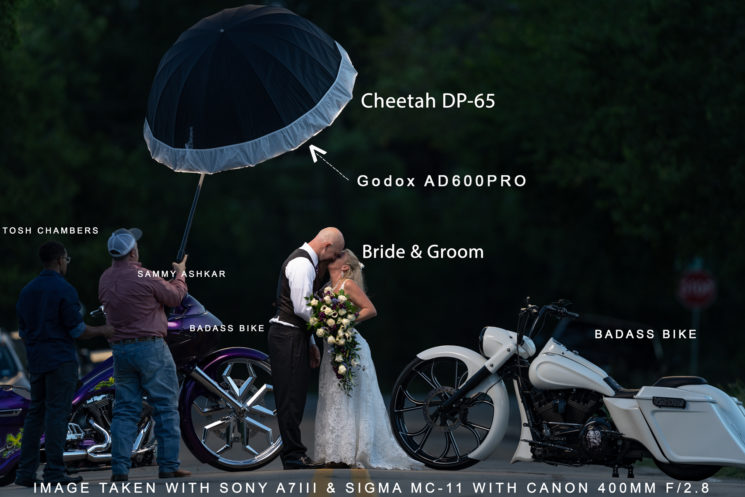 BTS shot with the Sony A7RIII and Zeiss 25mm f/2

This is a technique often used when you’re capturing a relatively wide scene with flash. Even a 600Ws strobe isn’t always powerful enough to give you the light you need while remaining outside of the shot – especially inside a 65″ box. So, taking two or more shots to light different parts of the shot and then compositing can be a great way to overcome the issue.

The final product is the outcome of two separate shots. The first shot included the bikes, bride, and groom with no lighting equipment or assistant. In the second shot, the subjects were lit with the help of my team. I used photoshop to align the images and removed my lighting assistant.

The outdoor shoot had to be cut short in the end, as a big storm rolled in a few minutes after these shots were taken, but the final result was definitely worth the effort.

How To Shoot Motorcycles Using Only One Speedlight

I shot motorcycles as a hobby, now I am a pro, here are my best 7 tips

What I Learned photographing my own wedding

« These are the winning photos from the 2018 Nikon Small World competition, prepare to be amazed
Light painting tools war: PixelStick Vs Magilight »