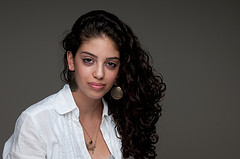 Yuval needed a few pictures for her facebook, twitter and other social media services she consumes (or is being consumed by hehe).

As profile pics seem to be popular these days, I thought I’d put the setup and photographs here on DIYP. It is going to be a one light portrait (and optional second light for background).

A while back we had a clamshot post that showed how to use two collapsible Westcott umbrellas to create butterfly lighting. It is a great light for the ladies that really gives that glamorous look. This is why it is also called paramount lighting. We also had a ghetto studio setup post for making a “table” kinda thing for this shot using a single strobe. This one was for the PVC lovers.

In this post I am going to explain how to create the same effect with a single light. (and then show what can be done with a secont light).The butterfly lighting is made with two elements, soft light from above and soft fill from below. Those two elements create a sideways “V” or a “>” sign.

The camera is then placed at the pointy side and the subject on the wide side.

The image at the top of this post was taken this way. We started by making a “simple” butterfly setup, a medium softbox coming from above and mounted on a boom stand. Reading Strobist’s Q&A about feathering a softbox was right on the dot and turning the box slightly downwards towards the knees was provided better results that placing it in 45 degrees angle.

The reflector is a simple foam board. Yuval doubled as a lighting assistant in addition to being the model and held the foam board at 45 degrees angle. For me asking the model to assist with lighting is a great thing. It provides something for the model to do, from my experience it helps to reduce the awkwardness factor.

We were about two meters from the wall, so although it is almost white it does not get any illumination. This is due a combination of the inverse square rule and the angle of the softbox. It is angled almost down, sending most of the light downwards, and very little light to the back of the room.

This is what we got with one flash which is good. However, we also wanted a happier picture with brighter background so she can have options. (And we did have an extra speedlight) This was achieved with an additional speedlight placed behind Yuval with a Stofen. You don’t see it because her head is actually hiding the strobe. 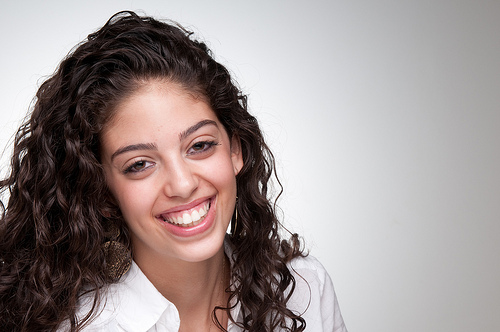 Looking at the LCD we thought that that white is kinda boring, so here comes color. The last photograph that we had with this setup was again very similar only with purple gel stuffed inside the stofen. 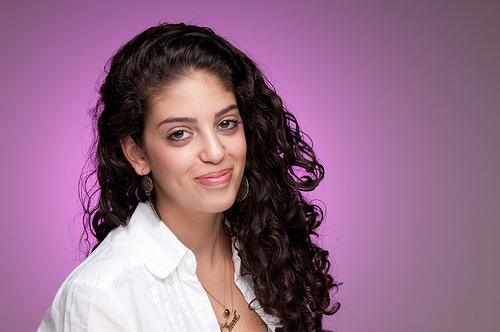 This diagram illustrates the setup for the last photograph 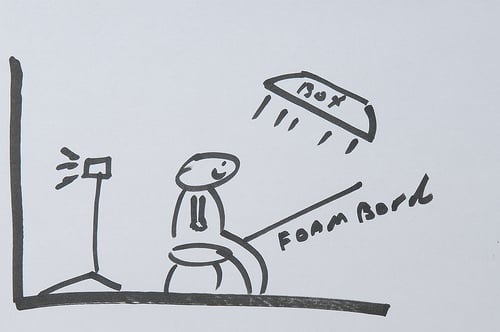 Now, the extra strobe can be removed from the diagram to get a single light portrait.

How to shoot overhead butterfly beauty lighting in a confined space