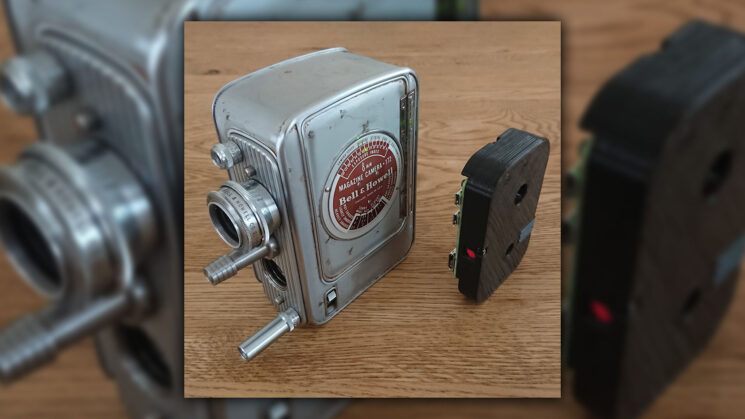 Converting old film cameras, particularly movie cameras, to digital has become a lot more viable over the last few years as devices like the Raspberry Pi and small form factor cameras to go with them have become more prevalent – even if there’s still a massive shortage going on right now. We’ve seen projects pop up lately showing some very cool conversion projects but this one dates all the way back to 1957.

The subject of this particular conversion is the Bell and Howel 172 Magazine-loading 8mm camera. Created by Airpocket, his goal was to keep the camera as original as possible and keep the “keep modern modifications to a minimum”. Of course, he had to add a Raspberry Pi to record the image but that’s pretty much the only alteration to the camera. Everything else is pretty much as is.

The conversion essentially involved designing and 3D printing a housing for the electronics that would essentially become a replacement for the 8mm film cartridge this camera would have used back in its day. He kept the original mechanism to fire the Pi’s shutter and it offers an experience that would likely be similar to that of shooting it with actual film – except for the whole messy chemical developing process afterwards.

About the camera, Airpocket writes:

The film feed and shutter are powered by a mainspring, and when the spring is wound up, the camera can shoot for about 35 seconds at 16 fps. It can also shoot back and forth on a single roll of film, recording approximately 100 seconds per side.

There is no single item that can be automatically controlled; aperture and focus are controlled by the lens, and exposure time is fixed in conjunction with the frame rate.

The preview is not visible and the viewfinder is very small, so it takes some technique to get the image you want.

Of course, I have never shot with 8mm film, but my goal was to recreate the fun of the surprise box-like experience of not knowing the result until the film is developed.

To keep things small inside the 3D-printed film canister replacement, a Raspberry Pi Zero 2 W is used. This also helps to keep the power requirements down vs a larger device like a Raspberry Pi 3 or 4. Basic manual control over ISO and white balance is provided through DIP switches. Aperture and focus are set by the lens and the shutter speed is fixed.

Even though it’s captured digitally and not on actual 8mm film, the sample video posted above does have that old school feel to it.

It’s a very cool project. If you have an old Bell and Howell 172 gathering dust somewhere and want to have a go at getting up and running with a Pi inside, you can find complete instructions along with the STL files for the 3D printed components on Hackaday.

How to Convert A Shoulder Pod For Digital Cameras