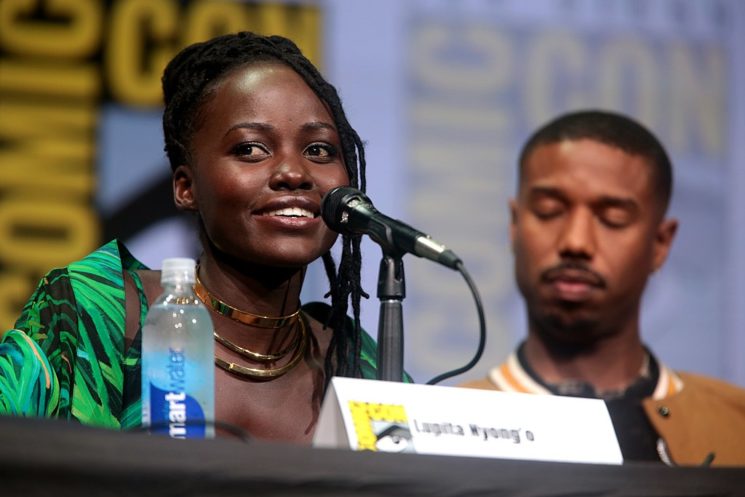 Grazia UK magazine has recently issued a cover featuring Lupita Nyong’o. However, her hair was so severely photoshopped, that the actress spoke out on social networks. She claims that her hair was edited out and made smoother “to fit a more Eurocentric notion of what beautiful hair looks like.” As a result, Grazia UK and photographer An Le apologized for an “incredibly monumental mistake.”

Disappointed that @GraziaUK edited out & smoothed my hair to fit a more Eurocentric notion of what beautiful hair looks like. #dtmh pic.twitter.com/10UUScS7Xo

As you can see from Nyong’o’s tweet, the original photos feature her with kinky hair tied in a ponytail. However, in the final image on the magazine cover, she looks like her hair is extremely short. The actress reacted on Twitter, calling out on Grazia UK for making her hair fit “Eurocentric notion” of beautiful hair. She wrote a more extensive post on her Instagram page, stating that she’s disappointed with Grazia UK’s move: “[…] Had I been consulted, I would have explained that I cannot support or condone the omission of what is my native heritage with the intention that they appreciate that there is still a very long way to go to combat the unconscious prejudice against black women’s complexion, hair style and texture.”

After the actress reacted, Grazia UK apologized and admitted they didn’t “uphold the highest of editorial standards in ensuring that [they] were aware of all alterations that had been made.” However, they made it clear that they hadn’t required the photographer to alter the images, nor they altered them themselves. So the blame fell on An Le, who took the photos for the cover.

Realizing his mistake, Le also apologized to Nyong’o for making “an incredibly monumental mistake.” The photographer pointed out that his altering of the photo wasn’t caused by any hate, but it was a result of “his own ignorance.”

“Though it was not my intention to hurt anyone, I can see now that altering the image of her hair was an unbelievably damaging and hurtful act. As an immigrant myself, it is my duty to be an advocate for the representation of diversity of beauty in this industry. I will demonstrate this in my work even more going forward.”

He apologized not only to the actress, but also to anyone else he might have offended. In the end, he thanked Nyong’o for “addressing this important issue.”

I can’t speak for either the photographer or the actress, but I don’t judge either of them. Nyong’o felt disappointed and spoke out about it. On the other hand, I believe An Le had his vision of the final photo (not that I approve he made the actress look almost bold). I don’t think it had anything to do with racism. Still, he took the blame and apologized, which certainly is the way to go after you mess something up.