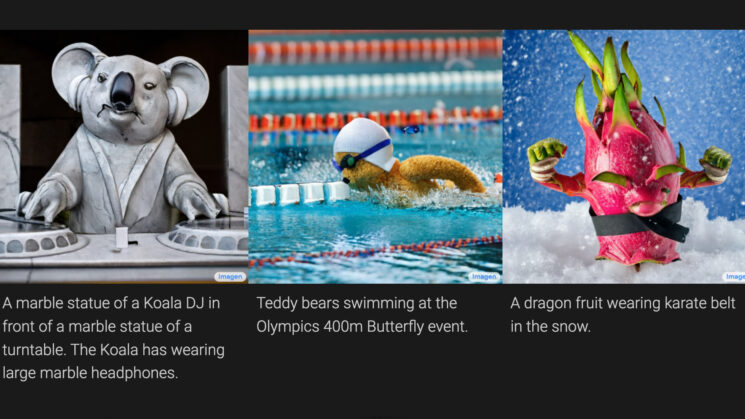 What’s the strangest thing you can dream up in your mind? Give it a go, the weirder the better. How about a pineapple riding a T Rex wearing blue striped pyjamas and a Viking helmet at a Rodeo?

It would take considerable effort to draw such a thing, let alone make a photograph of it, even with superior Photoshop skills. But Google has just reported that their new text-to-image AI programme, funnily enough, called Imagen, can do just that with a click of a button.

Google says that their programme beats all the competition such as Dall-E, and can create incredibly realistic looking ‘photographs’ of pretty much anything. So how does it work?

Well, like the other text-to-image AI programs out there it does what it sounds like. You enter a description of something via text, for example, “a photo of a Persian cat wearing a red shirt, playing the guitar on a beach” and the program will do the rest for you. Google has exhibited several examples on their Imagen page and the results do indeed seem impressive. However, these may only represent the cream of the crop in terms of image quality.

Now, in a slightly uncharacteristically responsible move, Google has foreseen the dark side of this type of AI and has declined to issue the program to general public use. The potential for evil, I mean misuse is too great apparently.

Imagen scrapes the internet for information to learn and create images. Because the internet can be filled with stereotypes and biases, these end up becoming present in Imagen. Google said the biases include a preference for lighter skin tones and certain Western gender stereotypes.

“Generative methods can be leveraged for malicious purposes, including harassment and misinformation spread, and raise many concerns regarding social and cultural exclusion and bias,” according to a paper published by Google. “As such,” the report continues, “there is a risk that Imagen has encoded harmful stereotypes and representations, which guides our decision to not release Imagen for public use without further safeguards in place.”

So what’s the point of these AI programs particularly if they aren’t being released to the public? Well, text-to-image learning models show the power of machine learning systems. In this case, Imagen removes the need to know how to use specialized software like Photoshop to create abstract images. Google hope that in the future people will be able to use computers and software in an intensely intuitive way, without the need to have to learn systems and software at all in the first place.

Now this isn’t going to replace photography any time soon so don’t worry. But just imagine (if you will) a time where you could do everything you wanted to in Photoshop just by telling the computer to do it. I don’t know if that’s a utopian idea or not frankly but it’s certainly an interesting one. I don’t know about you, but I could definitely benefit from using AfterEffects without having to spend hours learning it first.

How to create glowing text titles in-camera without Photoshop

DIYP Goes Black Friday: 25% Off Anything On Our Image Manipulation Store

« The easy way to fake a ground level FPV drone shot with a handheld 360° action camera
Lomography brings back the Daguerreotype Achromat 2.9/64 lens with new silver and black paint jobs »