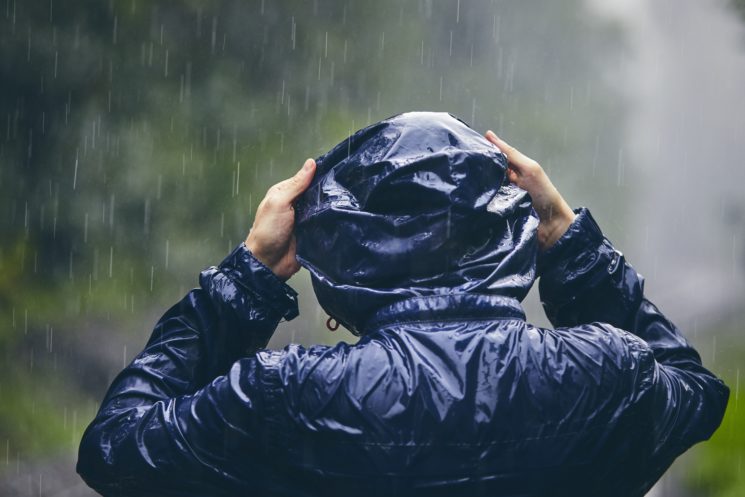 Filming in the rain is very tricky if you shoot in the natural rain and on a tight budget. But, it’s not impossible. Shutterstock Tutorials and Lewis McGregor bring you a bunch of useful tips that will help you to capture magnificent rain shots even when you’re shooting on a budget.

The problem with natural rain is that you often can’t tell it’s raining when filming it during the daytime on a cloudy, gray day. The droplets are too small and too fast for 24 fps shooting. So, the rain can simply look like mist, all gray and messy. This is why large film productions usually use artificial rain: they can control it, and it won’t fall on their gear and blur the lenses. But now all of us can afford artificial rain, right? Luckily, there are some tricks you can use if the rainfall is crucial for your shot and the story of your video.

First, you can film in the dark and use a strong backlight. You can add some backlights, but also rely on available lighting such as car headlights or street lights. This will make the rain stand out perfectly against the dark areas of the image.

But, if you must shoot during the daytime, frame your shot so you show the rain physically interacting with a surface. Film the droplets as they hit a car roof, puddles, and so on. You can also add a slow-motion shot if the story allows it to make an even better representation of the rainfall.

Don’t forget to protect your camera. Even if your camera and lens are weather-sealed, the level of weather-sealing isn’t universal and differs between manufacturers. Also, just because something is weather-sealed it doesn’t mean it’s also waterproof. In other words: heavy rain can ruin your gear. Because of this, it’s the safest solution to use additional protection when filming in the rain. You can buy cheap rain sleeves or a slightly more expensive (but still very affordable) rain cover. As a bonus – the rain drops won’t hit the front element of your lens and blur the shots. Of course, get a waterproof jacket and a good pair of boots to keep yourself dry as well.

I’d say this tutorial has come just in time, at least for us in the Northern hemisphere. I don’t remember when I last saw the sun, it’s been cloudy and rainy for days. If it’s the same where you live: well, maybe it’s time for some shooting in the rain, and I hope this video will help you get some awesome shots.

Follow these tips to nail handheld shots with telephoto lenses

« Leica FOTOS app is now free for everyone
Will AI editing ruin photography and what is the solution? »