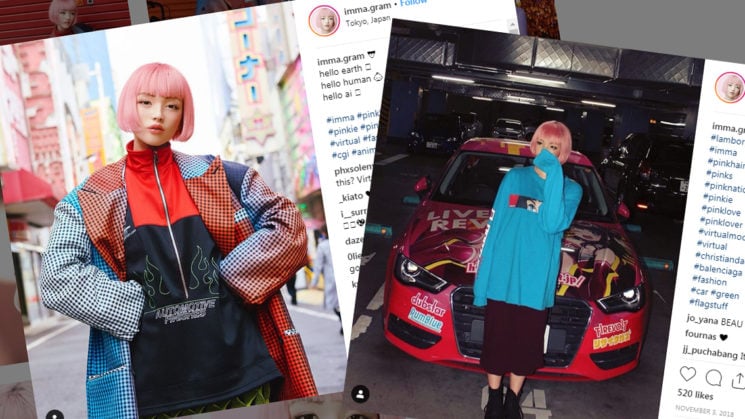 This is a topic that I’ve seen come up every few months in some form or another. Removing photographers from the process of image creation. And every time CG makes some incremental improvement, getting closer to the appearance of reality, I hear doom and gloom from photographers that their future is in jeopardy and “they won’t even need photographers anymore in a couple of years”.

And while that future might already be here for some product photography, it’s not quite happened for human subjects. Yet. But we may not be far off, if Imma’s Instagram account is anything to go by. Because Imma is actually not human. She’s a CG “virtual model”, who has mostly managed to claw her way out of Uncanny Valley.

When the world is reduced to pixels, as it has with digital photography, it was only really a matter of time before CG really started to catch up to reality when it came to people. CG Buildings, vehicles, explosions, quite a few animals, and a whole lot more already appear seamlessly mixed with live action footage in movies, and it’s becoming virtually impossible to tell what’s real and what’s not in most of them these days. And while Neo spinning around a pole in the Matrix movies was quite obvious, even CG people now are becoming very realistic.

According to IT Media, Imma was created by Tokyo-based CG company Modeling Cafe. Imma is a wordplay on the Japanese word “ima”, meaning “now”, and now, Ima is gracing the cover of CGWorld magazine. And as you scroll through her Instagram feed, you’d be forgiven for thinking that most, if not all, of the images of Imma are actually photographs.

When you look at some of the details close up, though, while still very impressive, the “perfection” becomes quite obvious. Sure, her skin obeys all the rules for things like subsurface scattering and her hair backlights the same way that real hair does. Her clothes, too (which was also perfected in CG at least a couple of decades ago) looks like real material and hangs realistically with natural creases and folds in all the right places.

But is she really that realistic? Or are we just so used to seeing too many models photoshopped to “perfection” over the last 15 years or so that we can’t really tell anymore? I’ll leave that one up to you to decide.

Personally, I don’t think she’s there quite yet, but I don’t think it’s far off. And even while the technology may become perfect in the next few years, I think it will still be out of the reach of many for a while yet. Just as Ikea puts out CG catalogues, many other furniture makers still rely on photography. Because it’s easier and cheaper.

I’ve seen a handful of these “virtual models” pop up on Instagram over the last year or two. Many of them initially purporting to be real people. Balmain is a brand that instantly springs to mind. Although, Balmain’s models definitely look more like images that have spent too much time in Photoshop.

Regardless, CG has certainly come a very long way since its early days.

« How to turn white into any color in Photoshop
Is done REALLY better than perfect? »