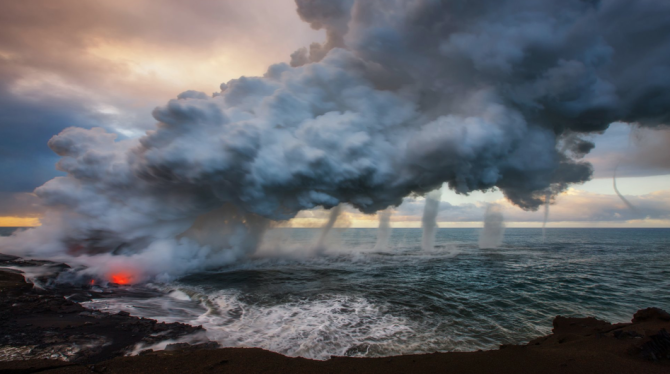 Hawaii really is a photographer’s paradise. It’s filled with beautiful people, dramatic landscapes, brilliant night skies, and enough varieties of sea life to keep an underwater photographer busy for a lifetime. Given the diversity of Hawaii’s climate zones (there’s 8 of the world’s 13 climate zones on Big Island alone), we also get some pretty wicked weather.

Over the weekend, I had the pleasure of visiting the Extreme Exposures Fine Art Gallery in Hilo, Hawaii where two photographers, Tom Kuali’i and Bruce Omori, display their work. Of course, all of the work gracing the walls of the gallery were eye-catching, and one photo in particular really stood out. The award winning photo has made its rounds on the internet and has even made its way into the Smithsonian Museum of Natural History. Seeing Bruce Omori’s “Volcanic Vortexes” in person (and beautifully printed on metal to boot) was even grander than one can imagine. 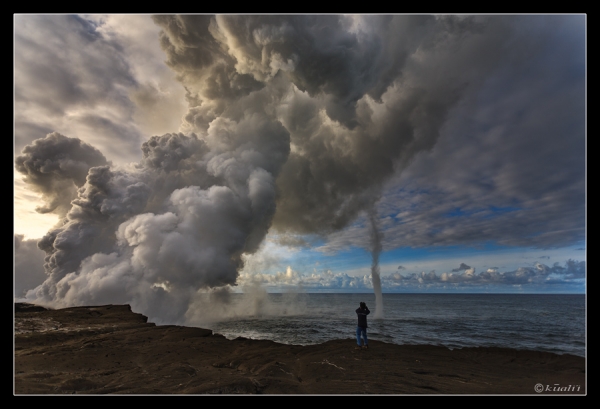 Omori getting the shot (Photo by Tom Kuali’i)

In an interview with the Hawaii Reporter, Omori described the experience saying:

“On an early morning shoot at the Waikupanaha ocean entry, lava from the Kilauea volcano poured into the sea. This created a huge escape of steam, and as it rose, multiple vortices began spinning off of the huge plume. A vortex or two is a pretty rare sight—but when one after another kept forming, my fumbling with the lenses turned into a panicked rush to switch my telephoto to wide angle lens to capture this awesome scene of seven vortices in a row.”

As one might expect from the name of their gallery, Omori and Kuali’i are often pushing the boundaries to capture the magnificent (and sometimes fierce) beauty Hawaii has to offer. Both are veteran lava and nature photographers who, besides selling their artwork, also offer photography tours just in case you ever find yourself on Big Island with a camera and don’t know where to start.

Looking At 120 Playboy Centerfold Photographs At Once [NSFW]

« How I Fixed My Canon 5D Mark II Shutter With A Screwdriver And A Sense Of Bravery
Mirrorless Photojournalists Rejoice – Fuji Announces An XF16-55mm f/2.8 R LM WR Lens »