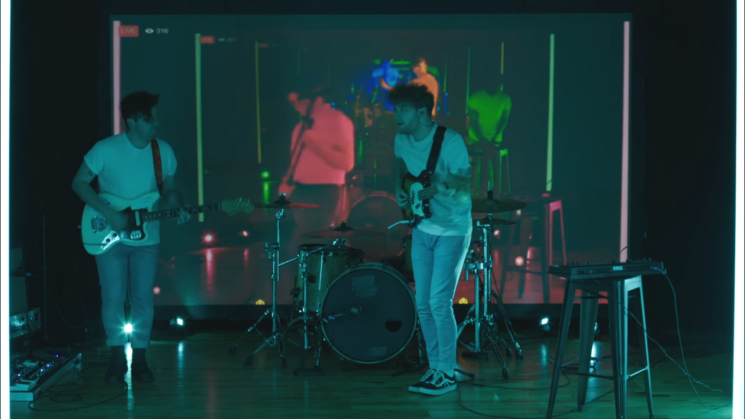 When broadcasting live on Facebook, there’s a short lag between your recording and the video being broadcasted. Musicians from a band The Academic used this lag to their advantage. They played the instruments in their song “Bear Claws” to create a video loop. Because of the lag, the instruments form the song layer by layer, while the trippy visual tunnel grows in the background. It’s amazing how something so simple creates something so enjoyable to watch.

The band writes on their YouTube channel how they recorded the video. They rearranged each instrument on the song to fit Facebook Live’s delay. As they added instruments, rhythms and melodies one by one, each loop would get more complex. They also projected the video live from a soundstage, so they “created an infinite tunnel consisting of all the previously recorded loops.”

Because the video and the sound loop add a new instrument each time, the guys also used different colored lights each time they would play a new sequence. This way, you can track the progress of the loop. Well, at least before the visual tunnel becomes too crammed.

At the beginning of the video, I got a little bit confused when the guy just got to the microphone and sang “Hey… Ho.” But then, the “lag magic” began. The instruments came one after another, and I couldn’t stop watching this trippy video. I don’t know if I’m right, but it seems pretty difficult to synchronize all the sounds and get something worth watching and listening. I mean, just look what happened to this guy.

I love music and really enjoy watching creative music videos. Even when the song isn’t really my cup of tea, the video can keep me engaged. In this case, I was captivated by the video, and as the song developed, I realized I like the music as well. So, this song and video were a complete audio-visual treat for me. How do you like it?