Film sets can be dangerous locations for both man and beast.  But, one film takes the cake in terms of hazardous working conditions, with 70 members of the cast and crew being injured during the process.

Roar was shot over the course of 11 years (NOT a typo) and is basically a reality movie with director/producer/actor Noel Marshall (The Exorcist) and his family (including stepdaughter Melanie Griffith) living with 150 untamed and untrained wild animals.  As one can imagine, living with a collection of dangerous animals, including lions, tigers, and jaguars, can lead to a little bloodshed.  As HitFlix describes it, “It’s Like Walt Diney went insane and shot a snuff version of Swiss Family Robinson.”

As reported by Indiewire, some of the injuries included:

“cinematographer Jan de Bont was scalped, requiring 220 stitches; Griffith was mauled by a lion, which required facial reconstructive surgery; an A.D. narrowly escaped death when a lion missed his jugular by an inch; Hedren, who was also attacked by birds on the set of “The Birds,” endured a fractured leg and multiple scalp wounds; and Marshall himself was wounded so many times that he was hospitalized with gangrene.”

For a production with this many (and this many severe) injuries, it’s amazing that nobody was actually “snuffed.”

The film cost about $17 million (in 1981 terms) to produce, much of that being fronted by Marshall after financial backers pulled out (with good reason, I might add).  Unfortunately, it only grossed $2 million in box office sales during it’s one-week showing overseas. 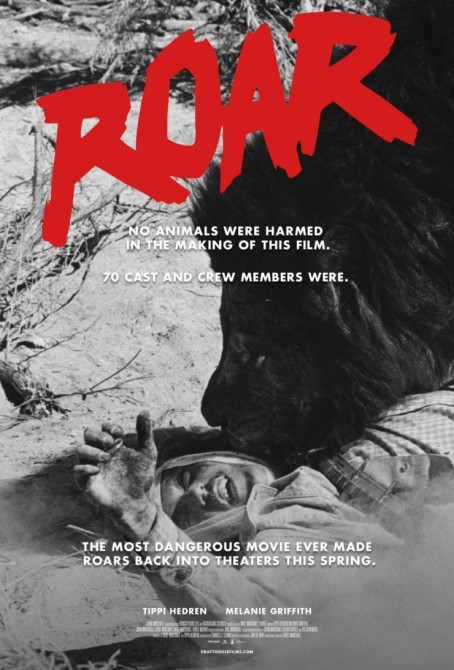 However, this little gem of a movie was re-released in April, thanks to Drafthouse Films, and this time in the U.S.  It raked in $102,445 in box office sales from 100 theaters.

While not the blockbuster the creators were hoping it might be, this dangerous piece of cinema is a testament to human tenacity and, admittedly, stupidity. Here are two clips to demonstrate:

Exactly how legal was it to produce a movie like this?  Even though the film was shot in South Africa, you’d have thought that authorities would’ve stepped in and put an end to filming.  And let’s not even discuss the liability premiums that I assume (or, hope) were in place…

Shooting Kim Coates: How To Balance Crew, Cast And Client Needs In A Corporate World

Grip it Good – The indespensable members of a film crew