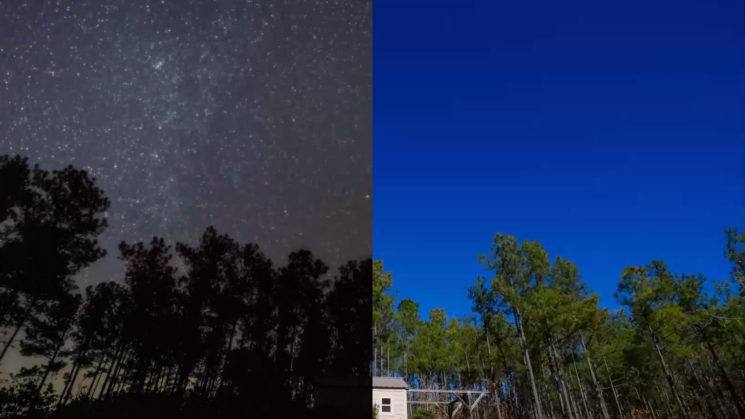 When we look up to the night sky, or even the day, we see the stars and the sun as objects that appear to move across our sky. In reality, they’re staying relatively still. It’s us that’s moving. Spinning around at up to 1,000 miles per hour. It’s a difficult concept to wrap our heads around, though. A thousand miles an hour seems incredibly fast, but things move across the sky so slowly.

We can see the evidence in star trails. Long exposures showing the circular curves of the path of the stars in the night sky. We know it’s us that’s spinning. But it’s still difficult to comprehend. This video from YouTuber, AlphaPhoenix gives it some perspective that makes it a little easier to deal with. It shows a 24 hour period from a static point. But what makes it so special is that the stars are static, while the earth rotates around it.

Although the effect isn’t quite so obvious during the daylight hours, when the stars come out at night, it becomes quite obvious. The scene was shot as one would expect, with the camera locked off on a tripod. The camera was pointed at Polaris; the North Star. This is the bright dot that appears fixed in the centre of the image at night.

The timelapse was shot on a Sony A6000 with the Samyang 12mm f/2.0 lens. One frame was shot every 2 minutes at a 30fps playback rate. So each second of video represents an hour of real time.

AlphaPhoenix also posted a video to YouTube going into more detail about how it was created.

As mentioned, the original footage was shot from a static position on a tripod. You can see that original sequence here. And, despite the light pollution, the night scenes quite beautiful. And here’s the spinning stabilised sequence without the commentary. Just a continuous loop. Well, for a couple of minutes anyway.

Another video was also posted, explaining the challenges of shooting a 24 hour timelapse, and how he overcame some of those problems.

You can check out the rest of the videos relating to this, and similar topics, on the AlphaPhoenix channel.

On one video, he mentions building a motorised rig that would counter the earth’s rotation. This would allow the camera to remain static relative to the stars, and the entire video would then film the frame. But that’s easier said than done. A recent video, though, shows a basic implementation of such a system. So, hopefully it won’t be too long before we see a 24 hour timelapse captured with a rotating camera.

All the same, for now, even with the black borders spinning around the frame, it’s a pretty cool and interesting video. It certainly offers a different perspective on things.

Sling Your Camera With A DIY C-Loop For Under $5

How To Make A 5 Minutes C-Loop