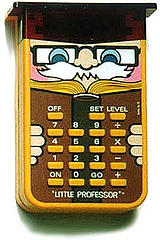 After sharing two posts of the Shooting the Team project, I believe you get the idea: Do an assignment like photograph, using journeyman flash accessories.

By telling the story of how I shot Omer, I’ll almost wrap up half of the team.

What I wanted to show in this portrait is Omer’s light and fun approach towards life (and work). “Surf’s up – Lets jump in” is just what you’ll hear him say at the beach or facing a challenging task at work. (Of course it was easier to convey the mood using a beach accessory).

So this is what Omer and I thought of – making a light feeling portrait while showing off Omer’s abs. 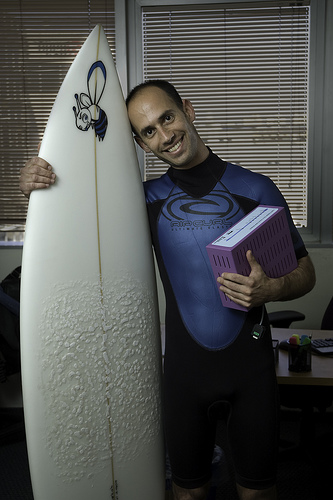 OK, so for this shot we planned to have Omer in his surf suit and hold a surfboard (His real waxed to the bone surfboard). After we took some shots, Omer was not satisfied with the relationship he and the board was showing and decided to lean his head a bit toward the board, which I thought gave this image just the touch it needed. 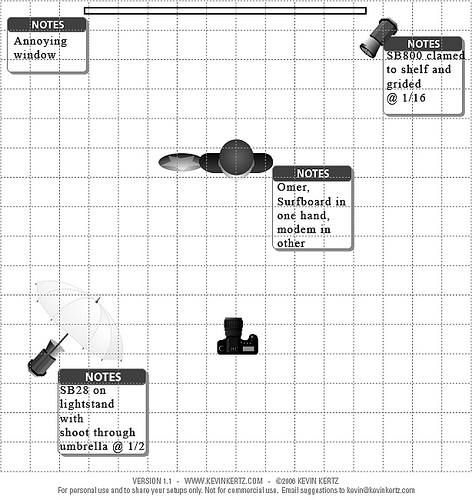 There was one big mistake in the lighting setup for this shot, and it is the window in the back. Other then this I am very happy. I had Omer lit with a Nikon SB 28 on a Manfrotto-Bogen 001b light stand to camera left. I triggered the flash with a hacked cactus remote.

To camera right and behind Omer, I placed a Nikon SB 800, fired via a stupid slave. I placed a grid on the flash to avoid flare and light contamination.

This is the first “Shooting the Team” post where I discuss post processing and hopefully also the last. Hopefully, because I don’t like making my editing in Photoshop. I prefer to do it all in camera. I did not notice how the backlight from the window was effecting the shot. I did notice it enough to scale down the shutter speed to the level where I got no flare, but only at home, I noticed how much the lit window “steals” the focus, so I burned it in Photoshop.

For next time I should consider one of the alternatives: use a different part of the office room as background or, find some better way to include the window as part of the shot.

As usual, I did some minor corrections in Lightroom, but nothing interesting worth mentioning.

You can read the Shooting the Team intro here and watch the pictures taken so far here.

Shooting the Team – The Tranquil Boss

« The Photo Book Made @ Home
PRESSlite – The Two Way SpeedLite »