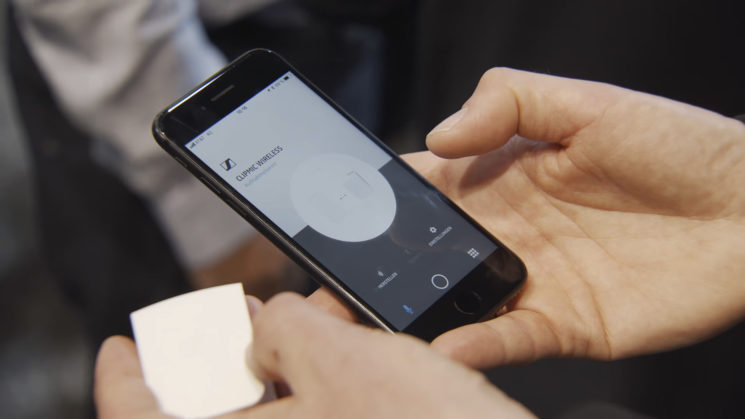 I use my phone to grab quick video clips regularly. But it’s not ideal, especially when it comes to audio. Smartphone microphones just aren’t that great. It’s a little ironic, really, given that, being phones, their primary function is to hear people talking and to let other people hear you talk. But when you point a phone camera at somebody and they start talking, usually you just hear them drowned out by background noise.

It appears Sennheiser are working to solve this problem, though, with a new product they’re calling “Memory Mic”. This is a working title as it’s still in development, but it essentially allows you to record audio wirelessly on your subject, and it does it without continuous access to wifi or Bluetooth. NoFilmSchool got to check it out in person at NAB this week and recorded a short video.

Essentially the way it appears to work is that a self-contained microphone & recorder clips onto your subject, as one might normally do with a regular lavalier microphone. It seems that it’s always listening, but syncs up timecode with your smartphone.

So, when you record a video, your subject can keep moving and walking from the camera, potentially well out of range of wifi or Bluetooth. When you’re done, you simply hold the microphone to the camera, and it copies it over to the phone. Then it compares the timecodes of the video clips and audio and only keeps the parts that match up, discarding everything else.

They say that it will also allow you to sync up the audio to multiple phones if you want to shoot smartphone multicam, for example. This could be the microphone that many smartphone vloggers have been waiting for. And with vloggers in mind, Sennheiser say they’re working with Filmic Pro to potentially incorporate compatibility into their software.

It’s a very cool concept, and they say it will be available for both iOS and Android. It’s still in development, but they’re hoping for a release date sometime in July or August 2018, with a $199 price tag.

Hopefully, they’ll have some to demo at Photokina this year and I’ll get to be able to try one of these out myself.

« Here’s all the data Facebook learns from a single photo you upload
Making it work: Studio photography in small spaces »