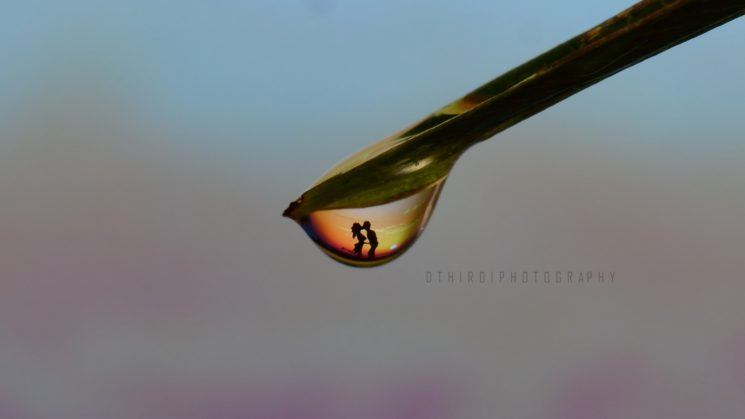 Water droplets give you plenty of methods for being creative in photography. There are many interesting images where drops of water (or sometimes glycerin) are subjects, or a means for creating unique photos. Photographer Mithun Das shared with us a creative photo he took through a droplet. It shows a silhouette of a couple hugging in the sunset, and he named it “Love in a Drop.” But there’s a catch – it’s not real water, a real sunset, and definitely not a real couple. But it’s not Photoshop either.

Mithun did it with some props and lots of creativity. He shared with DIYP how he took the shot and which props he used for making it. You may be surprised and amazed at the same time. I know I was.

First off, Mithun used glycerin instead of water to create a droplet on a leaf. It’s thicker than water and hence easier to work with, and many photographers also often use this trick. He attached the leaf to a selfie stick using a clothes peg, and put this strange “flower” in a glass. I love solutions like this, it’s brilliant.

The sunset is another surprise. It seems funny, but hey, it works. He used a photo of a sunset on a laptop screen. He rotated it for 180 degrees, so it appears properly orientated in the droplet.

And finally, what put a smile upon my face was the method for creating a couple in the image. It’s a paper cutout which Mithun made himself. He attached it onto the laptop screen, again in reverse, so that they appear properly orientated in the droplet.

Here are the BTS photos: 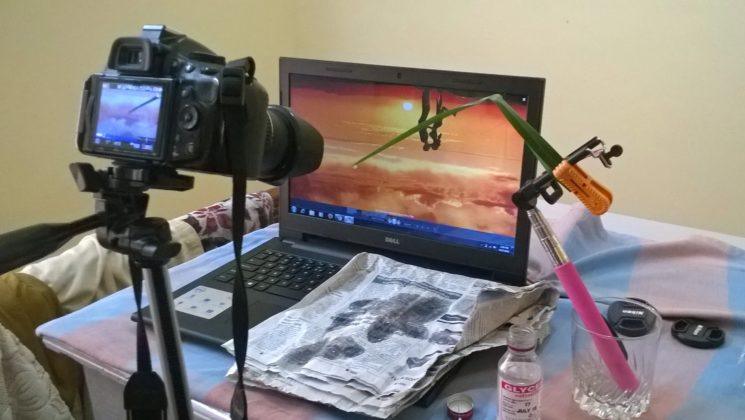 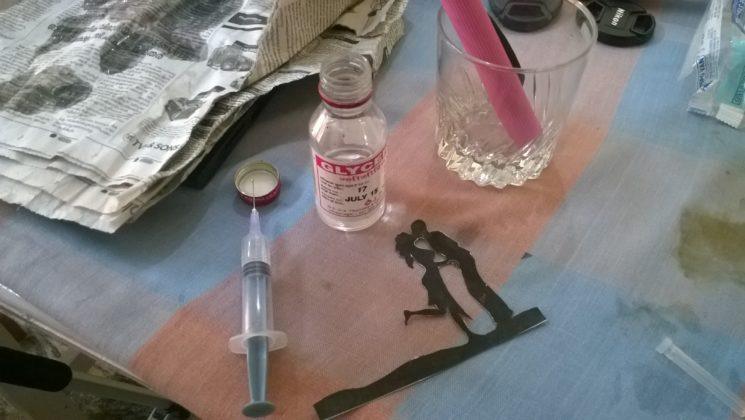 And here’s the final result:

Mithun explains that the setup wasn’t actually pre-planned, but luckily everything just fell into place:

The selfie stick idea was a lucky guess. The newspaper was the best thing I had at that moment to cover up the laptop from glycerin. I used a syringe to drop small droplets on the leaf which slowly accumulated to finally form a decent sized drop to form at the tip. Took me almost 2 hours and around 50-60 clicks and almost a full bottle of glycerin to finally get it. There hasn’t been much manipulation in it. I edited it with the software that comes with the camera, View NX2 just basic editing tools like brightness, contrast and so on. Cropped it and watermarked it with Picasa. In other words, 0% Photoshop.

As for the technical part, the photo was taken with Nikon D5200 and Nikkor 18-55mm. The settings were as follows:

As Mithun says, he has experimented before with droplet images, and those experiments led to creating “Love in a Drop.” He shared two other photos with us, together with the BTS shots. And I just love that everything is so DIY: 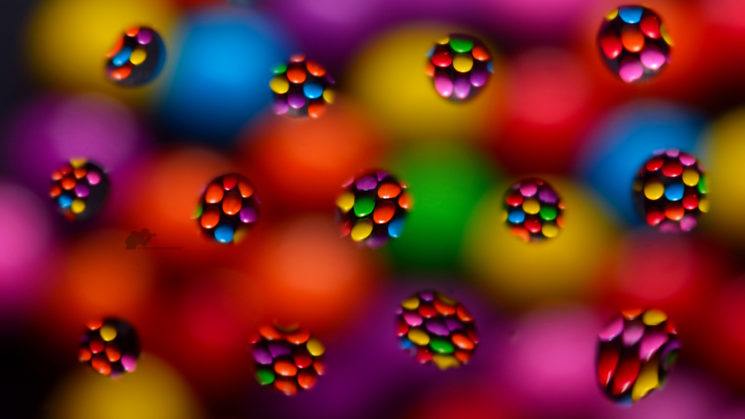 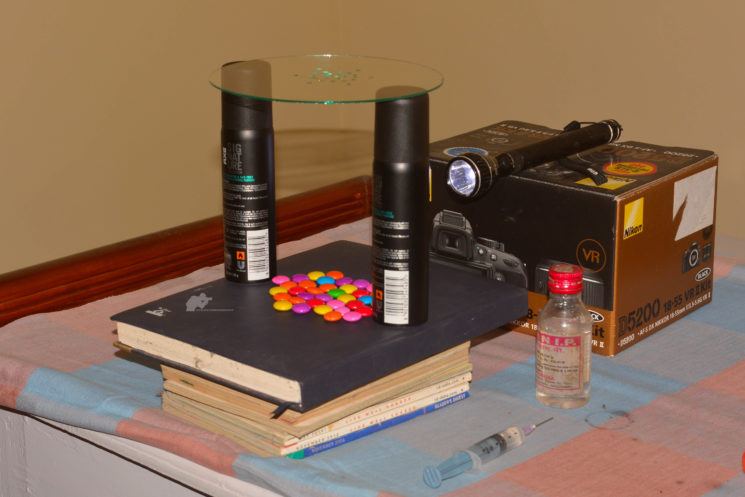 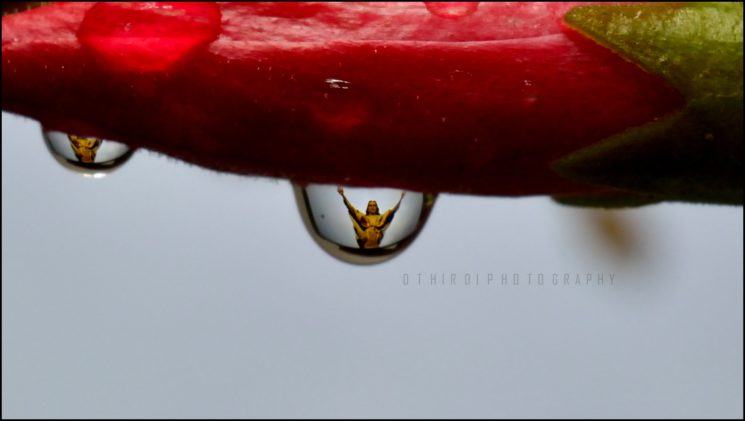 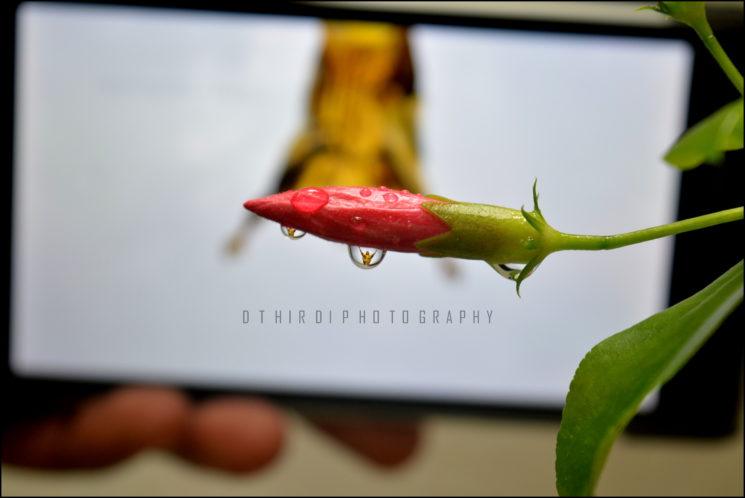 There is one thing Mithun wanted to point out, and it’s regarding the kit lens. He used it for the shot, and he has a message for all the newbies out there who only have this lens:

There is a common belief that kit lenses are just a piece of glass with no plus points, but I don’t agree to that. It has got decent wide angle range and a pretty good macro ability too. Many have told me after seeing the macros that I took with the Nikkor 18-55mm lens that they were either photoshopped or that I used some macro lenses. The 18-55mm kit lens is a great lens. To all the beginners out there it’s the perfect lens to start with.

Although my 50mm is my favorite piece of gear, I have to agree about the kit lens. It’s a great starting point, and you can create pretty awesome close-ups with it.

And as for “being lucky” and creating the setup, I’m gonna have to disagree. I think there’s more than luck here. You need to be creative and have a curious, playful mind to come up with a setup like this. DIY approach always calls for some creativity and problem-solving skills. Mithun’s creativity he invested in his “Love in a Drop” photo made me smile, inspired me to play with the stuff I have, and try and create some awesome photos myself.

Mithun M Das is a 25-year-old hobbyist photographer from Kerala, India. He is currently doing his engineering degree. He sees photography as a passion and that’s what he believes will be doing for the rest of his life. He has been into photography more seriously for the past 4 years. He started with a mobile camera, and after a year and a half, he bought his first DSLR, Nikon D5200.