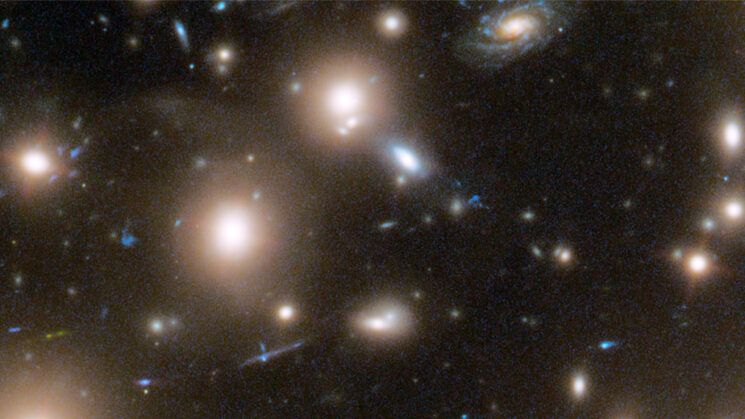 NASA’s Hubble Space Telescope brings us a pretty incredible and rare “blast from the past.” In a recent photo, the telescope captured three different moments in a supernova explosion that happened more than 11 billion years ago. In “universe years,” that’s merely childhood, which is certainly incredible. However, Hubble’s snap is special for something else too: shooting a supernova as it happens isn’t exactly an everyday sight.

To take this shot, Hubble relied on a phenomenon called gravitational lensing. For this particular image, the immense gravity of the galaxy cluster Abell 370 acted as a cosmic lens. It warped, bent, and magnified the light from the more distant supernova behind the cluster, and this warping also produced multiple images of the explosion over different time periods. What’s interesting is that they all arrived on Earth at the same time, and you can see all of them in a single Hubble image. “That was possible only because the magnified images took different routes through the cluster due both to differences in the length of the pathways the supernova light followed and to the slowing of time and curvature of space due to gravity,” NASA explains.

The left panel shows the portion of Abell 370 where the multiple images of the supernova appeared. Panel A, a composite of Hubble observations from 2011 to 2016, shows the locations of the multiply imaged host galaxy after the supernova faded. Panel B, a Hubble picture from December 2010, shows the three images of the host galaxy and the supernova at different phases in its evolution. Panel C, which subtracts the image in Panel B from that in Panel A, shows three different faces of the evolving supernova. Using a similar image subtraction process for multiple filters of data, Panel D shows the different colors of the cooling supernova at three different stages in its evolution.
Credits: NASA, ESA, STScI, Wenlei Chen (UMN), Patrick Kelly (UMN), Hubble Frontier Fields

In the image, you can see the fading supernova’s rapid change of color. As NASA explains, this indicates temperature change. While we connect blue to cold and red to warm, it’s quite the opposite in the images. The bluer the color, the hotter the supernova, so the earliest phase captured appears blue. As the supernova gets colder, its light turns redder.

“This is also the first time astronomers were able to measure the size of a dying star in the early universe,” writes NASA. “This was based on the supernova’s brightness and rate of cooling, both of which depend on the size of the progenitor star.” 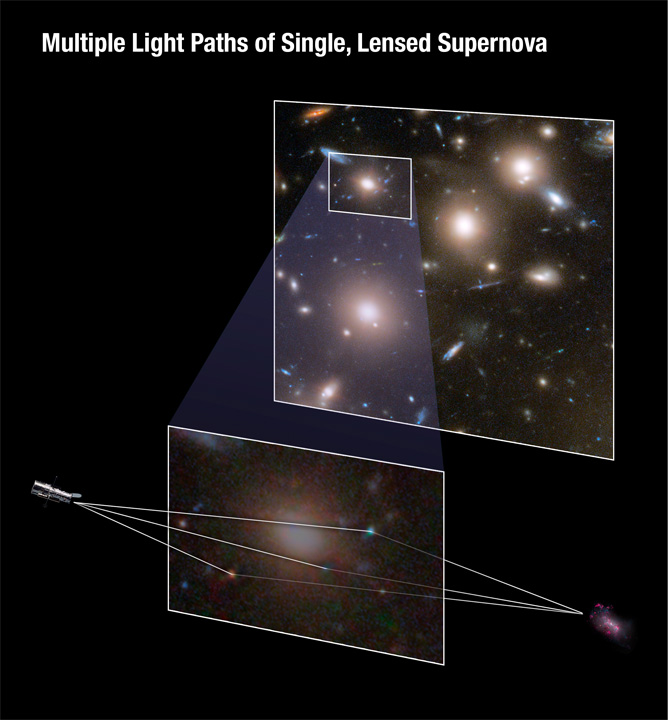 The top box shows a portion of Abell 370. The box-within-the-box marks the area where the distant supernova was multiply lensed. The bottom image is a magnified version of this area with the light paths marked for the three images of the supernova. The right side of the bottom image shows the distant galaxy in which the supernova exploded. The lines show how the light traveled through the gravitational lens, with some of the light taking longer routes across “valleys” of warped space. The warping produced three images of the explosion over different time periods that all arrived at Hubble simultaneously.
Credits: NASA, ESA, Alyssa Pagan (STScI)

The current age of our universe is 13.8 billion years, and the latest supernova image was shot when it was less than a fifth of its current age. “This is the first detailed look at a supernova so early in the universe’s history, NASA writes in the statement. Of course, it could be of immense help to scientists and enable them to learn more about the formation of stars and galaxies in the early universe. The paper explaining the recently captures supernova has been published in Nature Magazine.