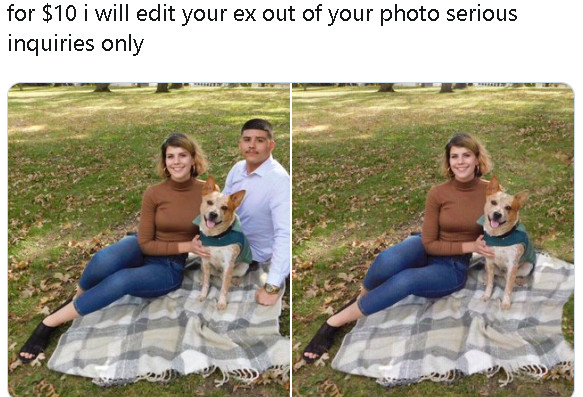 An artist recently posted a tweet offering to remove people’s exes from their photos for $10. It seems that she totally hit the spot: she got so many requests that she can’t seem to keep up with the demand.

The tweet was posted by young artist @hexappeaI, who also added a “before and after” example. She noted that she would consider “serious inquiries only:”

for $10 i will edit your ex out of your photo serious inquiries only pic.twitter.com/QDLfNlb86u

Her tweet hit over 162K likes and 18K retweets. Not long after the original offer she posted, she had to raise her rate. “Due to the amount of messages [I’m] getting I’m raising the price to $15. If you messaged me before this, it will still be $10 when I get to you,” her next tweet reads.

due to the amount of messages im getting i’m raising the price to $15. if you messaged me before this, it will still be $10 when i get to you.

I’ve seen many artists on Fiverr offering to remove background or objects from photos for as little as $5. And just as folks on Fiverr, some Twitter users quickly offered to do the same thing for $5. A few of them even posted freebies they’d done:

I can do it for $5 pic.twitter.com/yCf9ijae4o

I’ll do it for $5 pic.twitter.com/E4RtmdVsBD

No sure if I got the right guy ? pic.twitter.com/MAxLlkauaN

I got you sis ?? pic.twitter.com/WnaismRQS2

A couple of users couldn’t help but notice that she didn’t exactly do a perfect job removing exes from photos, at least not in her example image:

One of his shoe is still there. If you want serious inquiries, please deliver serious work lol pic.twitter.com/3EfoSps6S5

Still, despite everything, it looks like the clients are pleased with the work @hexappeaI has done for $10 (or $15). Some of them posted the results on Twitter:

She did the damn thing ? pic.twitter.com/9N3NUQkCOD

Best $10 I will ever spend pic.twitter.com/8uadVOyOey

Guys she really killed it pic.twitter.com/5GzzR3FNx7

What’s even more interesting is that @hexappeaI is doing the work on her iPhone. Eat your heart out Photoshop masters!

thank u i literally do it on my iphone

So, it looks like we can throw away our Photoshop skills out of the window and start using a phone app to edit photos and make money. Joke aside, I admire this young lady’s entrepreneurial spirit and idea. She seems to have found a very specific, yet numerous audience. You can’t change your personal history in real life, but hey – at least it’s possible to do it in photos. And it looks like there are many people willing to pay for it.

Tips to Get Paid From Photography Use Requests