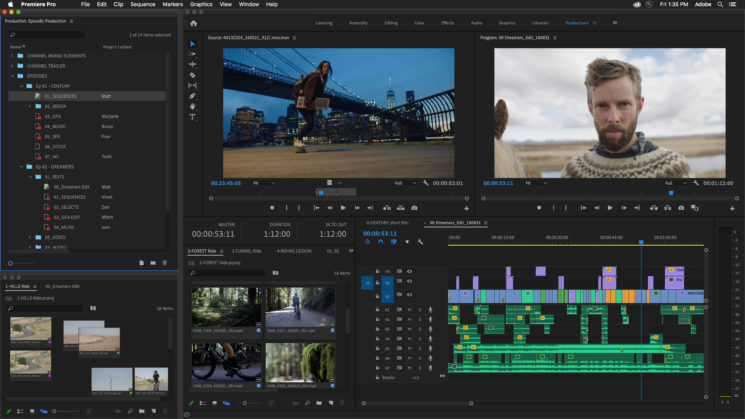 Back in January, Adobe announced Productions – a new tool which allows Premiere Pro CC users to more easily collaborate in post-production and editing. They say that it improves the workflow for feature films, broadcast and web-based content while working in teams in various locations, but also when working on your own, too. Now, Productions and Team Projects are available for Premiere Pro and After Effects CC users, the latter of which is free until August 2020.

One of the big limitations of Premiere Pro is that it only really allows you to work on one project at once. Sure, you have multiple files for multiple projects, but you can’t open several of them at the same time – this can make things tricky if you want to copy elements of one project to another.

It also essentially only has a single “master” file for each project. You can’t easily share it with somebody else and both of you be able to work on it together. If two people load up a project to start working on it, as soon as one hits save, it overwrites the other person’s changes. Productions and Team Projects are Adobe’s official solution to this, allowing single users to open up multiple projects as well as teams of multiple people work on a single project.

Productions is essentially the tool for multiple users working in the same physical location using shared storage. It allows several users to open up and work on projects together without getting in each others way or overwriting each others work. Team Projects is a similar but distinctly separate tool which is built specifically for remote collaboration.

With many people working remotely from home these days, the timing of this release couldn’t really have been any better.  The highlight features of Team Projects include…

Team Projects for online collaboration is currently completely free for all Premiere Pro and After Effects users on Creative Cloud individual plans until August 17th, 2020. After this date, however, the Team Projects aspect of Productions will only be available to Team and Enterprise licenses for Premiere Pro and After Effects. Hopefully, though, by that time, the teams that are currently working separately might be able to start sharing the same office space again and have physical access to shared storage.

Adobe is running some online live streams with Adobe Evangelist, Jason Levine and guests until April 17th. The complete schedule is here, and for streams that have already happened, a link to the stream archive has been provided.

Productions and Team Projects are available now for qualifying Premiere Pro CC and After Effects CC users, and you can find out more on the Adobe blog.

« Apple has announced the second generation of its single-camera iPhone SE
Nikon Z 24-200mm f/4-6.3 lens to be delayed due to the coronavirus »