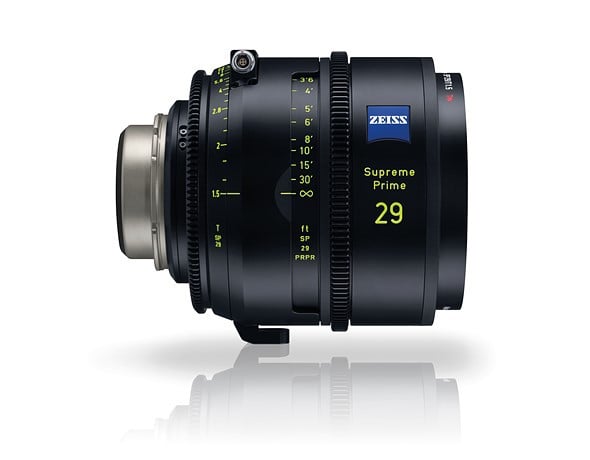 Zeiss has announced their newest set of cinema lenses for advertising and movie production. Although these lenses are smaller than their counterparts, the German company promises that they will offer top of the line results for filmmakers.

The Supreme Prime line comprises of 13 lenses altogether with focal lengths between 15mm to 200mm Ten of the lenses will feature a maximum aperture of T1.5.  The outliers are 15mm and 150mm with T1.8, while the 200mm will have T2.1. These set of optics will be compatible with full-frame cameras that include the RED Monstro, ARRI Alexa LF, and Sony Venice. Check out the short video clip shot using the new Zeiss lenses below:

You can buy the first six cinema lenses released this year for a whopping $108,000. That’s not even half of the set. Nevertheless, these lenses aren’t for regular consumers. So don’t fret if you can’t afford it.

Feel free to scroll down if you want to learn more about the Supreme Prime lenses. Or you can also check out their website for more details.

With its 13 high-speed, full-frame, prime lenses for high-quality film productions, ZEISS is focusing on maximum quality, low weight, and significant versatility when it comes to creating superb visual imagery.

ZEISS has introduced a new family of high-speed lenses for high-end film production: The ZEISS Supreme Prime family consists of 13 lenses with fixed focal lengths between 15 and 200 millimeters, the majority with a maximum aperture of T1.5. “The lenses are designed for film productions of an extremely high quality,” says Christophe Casenave from ZEISS. “They are perfect for high-budget advertising or feature films, for example.” ZEISS Supreme Primes are designed to cover cinematic large format camera sensors and are compatible with all of the latest camera models, such as the Sony Venice, ARRI Alexa LF, and RED Monstro. According to Casenave, the versatility of the Supreme Prime lenses to create different visual looks is due to the gentle sharpness, the aesthetic focus fall-off and elegant bokeh. The lenses are extremely flexible and can be used equally well for science fiction thrillers as well as for dramas.

“Weighing an average of 1,600 grams (3.5 pounds), ZEISS Supreme Primes are significantly lighter and smaller than comparable lenses on the market,” says Casenave. With these compact and lightweight lenses, ZEISS is responding to many camera operators’ desire for compact equipment that still meets the highest standards of quality. “ZEISS Supreme Primes are unbelievably rugged and reliable. Regardless of whether filming in the desert or in the Arctic, the lenses perform flawlessly. And in the event that something should ever break, our worldwide service network provides fast and professional help.”

The ZEISS Supreme Primes are equipped with the ZEISS eXtended Data metadata technology. Introduced in 2017, ZEISS eXtended Data provides frame by frame data on lens vignetting and distortion in addition to the standard lens metadata provided using Cooke’s /i technology1 protocol. This greatly speeds up the entire film production’s workflow. When using visual effects for example, with only a few clicks, the lens properties can be removed so that computer-generated effects imagery can be accurately applied to the captured imagery. The lens properties can then be reapplied with the same click of a button and combined with the film material to create a realistic image. Previously, all of the data had to be measured manually so that it could be corrected in post-production. But ZEISS eXtended Data eliminates this time-consuming job.