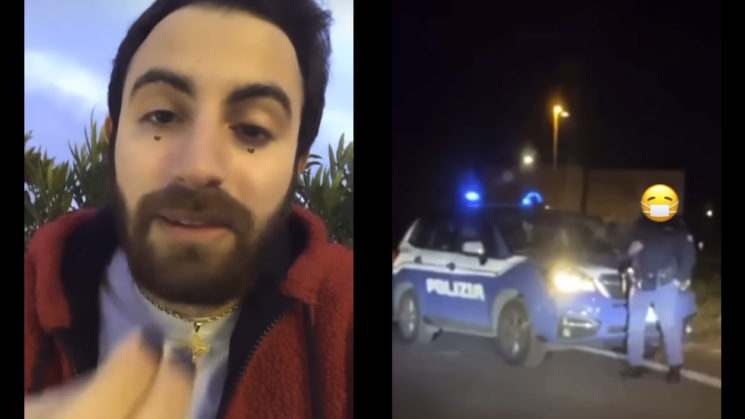 The things people will do for social media. Italian YouTuber, 24-year-old Francesco Belardi is facing three months in prison after he made his 80K Instagram followers and 390K YouTube subscribers believe he had evaded checkpoints in Lodigiano, Italy, according to Corriere, and entered what they call the “red zone“. An area of quarantined towns in the Lombardy region around Milan.

Going by the name “Social Boom” on YouTube, Belardi made his Instagram followers believe he had eluded checkpoints to shoot “exclusive footage” of what’s going on in the cut-off area of Italy. His Instagram account has since been made private, but the video of his Instagram Stories still exists on YouTube. It’s in Italian, so you may want to turn on subtitles.

In the video, which are screen captures of his Instagram Story, Belardi explains how he was able to evade the checkpoints and describes in some detail exactly what the police presence was like around the town. He talks about how he and a group of friends managed to enter the town. He mentions in the video that he knew he was risking a three-month prison sentence and a €200 fine for entering the area.

He went on to claim that “the rumours circulating are false: you can enter the red zone in complete tranquillity, but then you cannot leave it for fourteen days”.

The only problem was, the story was completely fake. La Repubblica reports that Belardi actually filmed the videos in the nearby town of Guardamiglio, outside of the quarantined “red zone”. Corriere says that his claim about being able to easily enter the red zone, you’re just not allowed to leave, was also false and that “the rules are quite clear” with regard to who can enter the area – which is essentially nobody, save for exceptional circumstances specifically authorised by the Prefecture.

A complaint has been made against Belardi, who potentially faces three months in prison for “Publication or diffusion of false, exaggerated or tendentious news, likely to upset public order” – article 656 of the penal code. As well as three months in prison, he also faces a fine of up to €309. And in a video he posted to his own channel, updating his audience on the situation, he says he will also have to buy a new phone as his has been confiscated by police.

Belardi has since made his Instagram account private, as a result of the backlash he’s received, although it seems to have transitioned to his YouTube comments.

Adnkrokos writes that Belardi has also seen backlash on Italian TV, with one reporter saying that he had “a cretinovirus moment”.

If there’s one thing Italians do well, they have some of the best insults in the world.

« Hear how the sound of Fujifilm’s camera shutters has changed over the years
Adobe Summit canceled over coronavirus concerns, switched to online-only event »