Nobody likes seeing dislikes on their videos, especially for smaller YouTubers just starting out. It can be very disheartening and put you off creating any more content at all. Some videos, naturally, deserve all the dislikes they receive, but many are simply the victim of trolls and haters.

Well, YouTube’s been experimenting recently and they’ve decided that they’re going to start hiding the dislike count. Their theory is that more trolls will be less likely to click the dislike button if they can’t see how many have come before them, thus reducing the harassment many YouTubers receive. 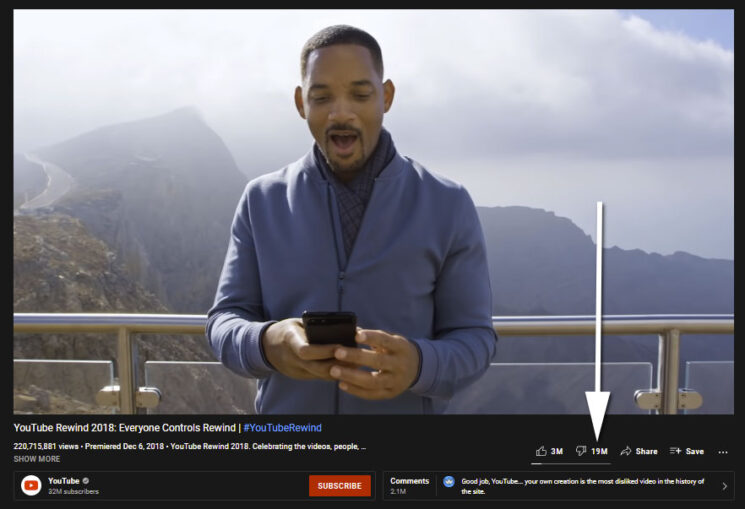 While there are a number of photographers and filmmakers on YouTube with very large followings, this isn’t the norm for most of us. YouTube is rapidly becoming a fantastic way to promote and grow your photography and video business, but many have been put off by the struggles of starting and growing a channel – with comment and dislike trolls being one of the most commonly cited reasons.

YouTube says that many smaller YouTubers have reported that they’ve been the target of “dislike attacking behaviour” and in experiments where they hid the dislike counter, the data showed that there was indeed a drop in dislike trolling on content towards those smaller creators.

To be clear, the dislike button isn’t going away. Viewers will still be able to click the dislike button in order to help YouTube tune the videos it recommends to them, but nobody will see how many people have clicked the button except for the creator themselves. Creators will still be able to view their exact dislike count inside YouTube Studio, but that’s the only place it will be available.

There is a possible argument to be made that this will be detrimental to the viewing audience as they’ll no longer be able to see which videos just suck due to very skewed like to dislike ratios, but YouTube said that they saw very little difference in viewership regardless of that ratio.

The change started rolling out yesterday and while some of you will still see the dislike count on videos you watch (I still do at the moment), they’ll all be going away soon.

YouTube’s video announcing this change is currently at 7.4K likes and 26K dislikes. So, it seems that most people are not pleased with the decision. How do you feel about it? Will this be a good or a bad thing?

« Instagram wants you to take a break from Instagram. Yes, really
This is why you keep getting nightmare clients and how to stop it »