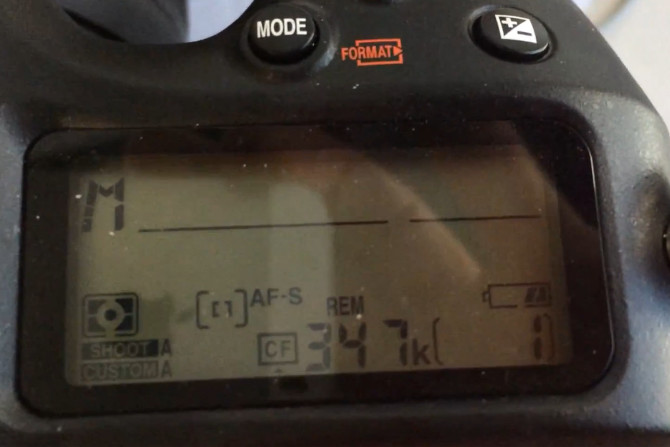 It’s been over a year since the first 512GB memory cards were announced, but it was usually their price that drew most of the attention, and it’s quite understandable why considering they can cost more than some DSLRs.

While we all knew that 512GB is massive, Jared Polin (aka FroKnowsPhoto) really drives it home in this video. After sharing with his viewers that the D4s can shoot over 13,000 RAW files, he was asked how many JPEGs could fit in the card.

It took a while for the card to load due to its ridiculous capacity but, the results show that some people will never again have to swap their memory card. EVER.

In order to get the most out of the card Jared set the image quality on the D4s to JPEG basic and the size to small. The result was a jaw-dropping 347,000 photos remaining on the camera’s top LCD. Yes, that’s over one third of a million photos in just one card.

Now take into account that you will usually be able to get more photos than the LCD show, I’d guesstimate that I get 5-10% more, and you’re awfully close to 400k. The D4s, along with the Canon 1D X, has the sturdiest shutter of all DSLR and is rated to last 400,000 actuation. In other words, you could pretty much wear out the shutter before having to use a fresh memory card!

Chances are you will have a hard time finding a D4s owner that shoots just JPEG basics, but while this video was made out of curiosity rather than a recommendation to do so, there are many beginners and enthusiasts that do in fact shoot this way.

These photographers will be able to get fewer photos out of their cameras due to the standard sensor in beginner cameras containing 24MP compared to the 16MP of the D4s. On the other hand, low-end DSLR shutters are rated to only 100,000 actuations so one card could go through four cameras.

Most people agree that you shouldn’t put all your eggs in one basket, and this card has enough space for all your eggs, future eggs and chickens.

If for whatever reason you fancy this concept, you can’t be too picky when it comes to choosing as there are only two 512GB memory cards currently available – Lexar’s $880 CF card Jared Used and the $600 SD card made by SanDisk.

At less than half the capacity but at a fraction of the size, SanDisk recently announced the world’s highest capacity MicroSD card packing 200GB.

Obviously these cards weren’t made for us to squeeze a lifetime worth of photos on a single card. Instead they aim at meeting the demands of ever increasing sensor sizes and Ultra High Definition video resolutions. Large sensors such as the D810’s 36MP or the 5DS/R’s 50MP, and 4K video are becoming rather common and neither SanDisk nor Lexar are willing to be the bottleneck of today’s megabyte-gobbling technology.

« Thought That 4K Monitors Were Too Much? LG Outs Apples Plans For An iMac 8K
Velvet 56 Is The Portraits Lens You Always Wanted »