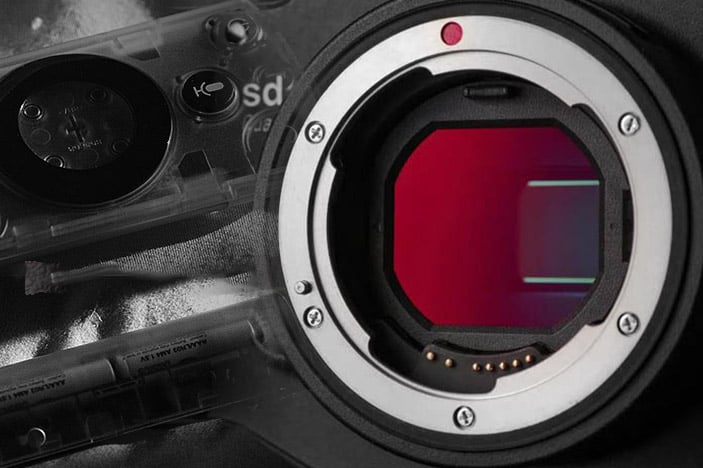 While Sigma is known as a lens company, most people don’t know they also make cameras.  That was until the Sigma released the “fp“.   The world’s smallest full-frame camera that can shoot 4k DNG raw hit the market.

Sigma has been making cameras for many years though. Not only they use a unique Foveon sensor, but most of their cameras also feature a user-removable IR-cut filter.

Now, shooting Infrared isn’t new – People have been doing it for years!  While most cameras can’t shoot infrared there are companies who will remove/modify the IR-cut filter from your camera.

Sometimes manufacturers will even release limited edition cameras, such as the Pentax 645z-IR or the black and white Phase One XF IQ3 Achromatic. These are a specialist thing and in fact, you can’t buy the 645z-IR as a consumer.

There are many reasons to allow your camera to see more than the visible spectrum. The most common is to have a different look to an image. Different wavelengths of light affect objects differently. But there are professional uses too, like using infrared light to pass through the surface of the paint to reveal an underlying image in art.

Take this example of my Amazon remote using the Sigma sdQ-H with the filter removed and a  Zomei 720nm cut infrared filter that blocks visible light on the 70-200 f2.8  Sport. 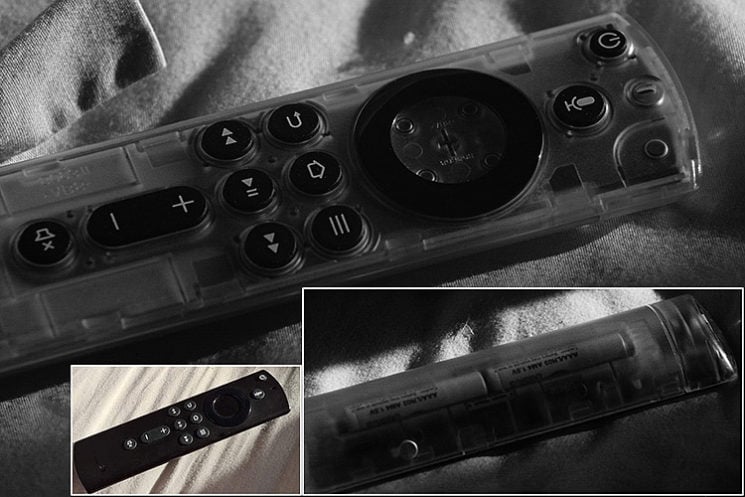 You can actually see through some of the plastic and see the writing on the battery inside. Crazy stuff!  it’s simply that infrared light affects objects differently and we can’t see this as humans.

Removing the IR-cut filter from the Sigma sdQ or sdQ-H is a simple process, there is a little catch on the side you press then pull the filter out with the tab at the top, it’s easier if you have some plastic tweezers not metal as a slip could scratch the filter.  The glass on this filter is thin so have somewhere safe to store it. 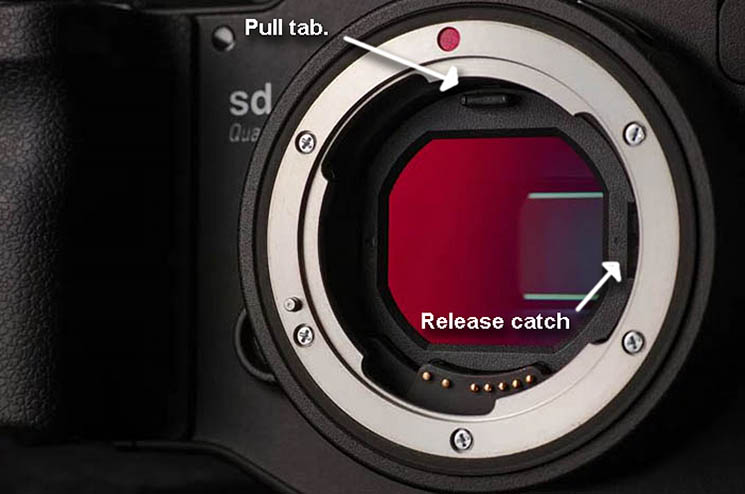 Once the filter is removed you can simply mount a lens and start shooting.  The sdQ or sdQ-H are mirrorless cameras so the EVF and LCD will both show you exactly what the camera will see and allow you to auto-focus.  Here’s an example of a scene shot normally, then with the IR-cut removed and also using two other filters on the lens to shape the light. 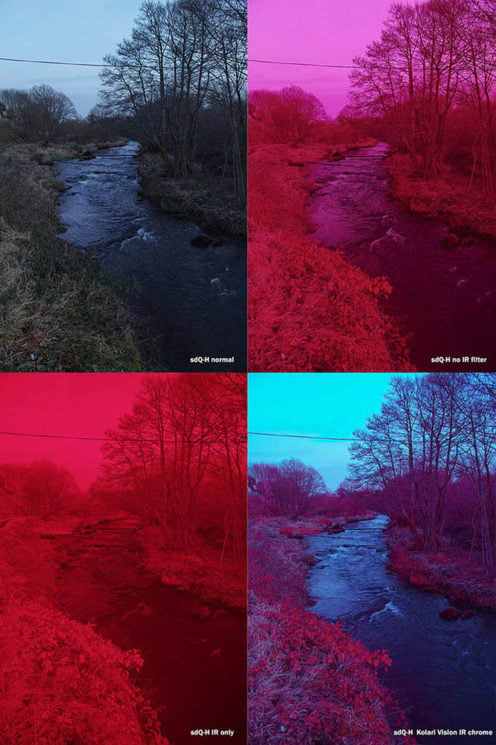 My personal favorite filter when shooting this way is the Kolari Vision IR chrome filter, this filter is designed to be used with full-spectrum cameras to emulate Kodak Aerochrome III on digital. 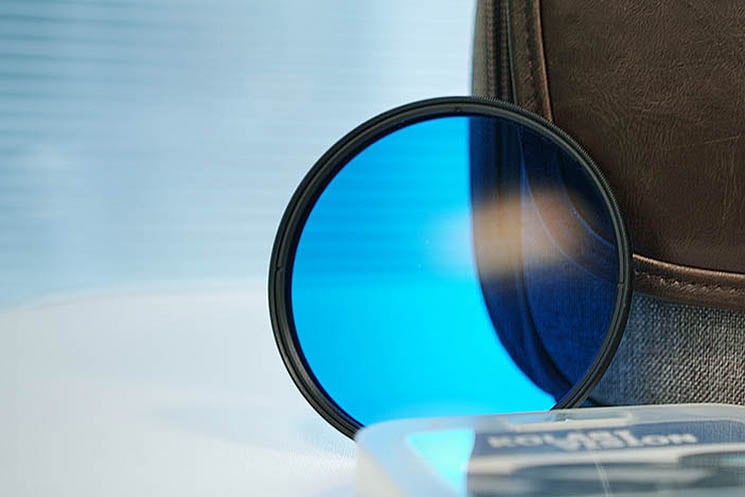 This filter allows for a unique blend of visible and infrared light giving the foliage a striking deep red look while allowing for a blue sky back into the image. 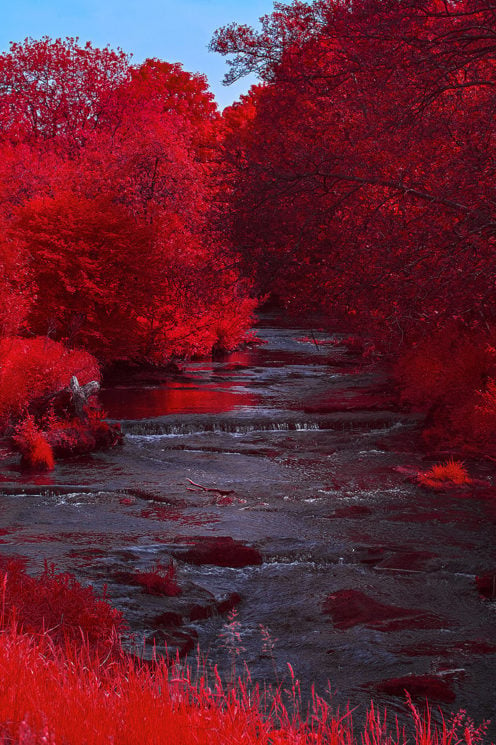 Selecting different color and white balance modes in Sigma Photo Pro can allow you to dial down the vibrate reds which can sometimes suit different subjects like this solo Dandelion. 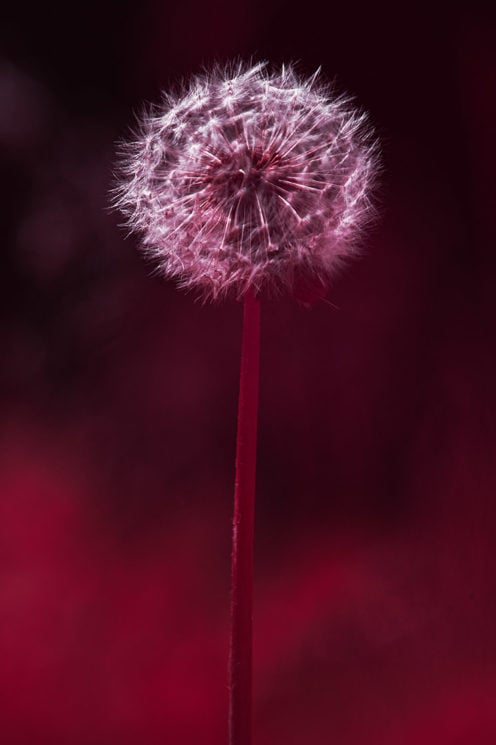 Personally, I like the Cinema color mode the best with this filter as I feel it gives a more natural blend of colors like in this photo of my dog from with the 18-35mm f1.8 Art.

The ball is still yellow/green and the houses in the background are almost normal in color.  The grass is now a muted pink hue instead of bright red, which I feel suits this image better, and from what I have seen from my research on how Kodak Aerochrome III actually looks depending on how it was processed. 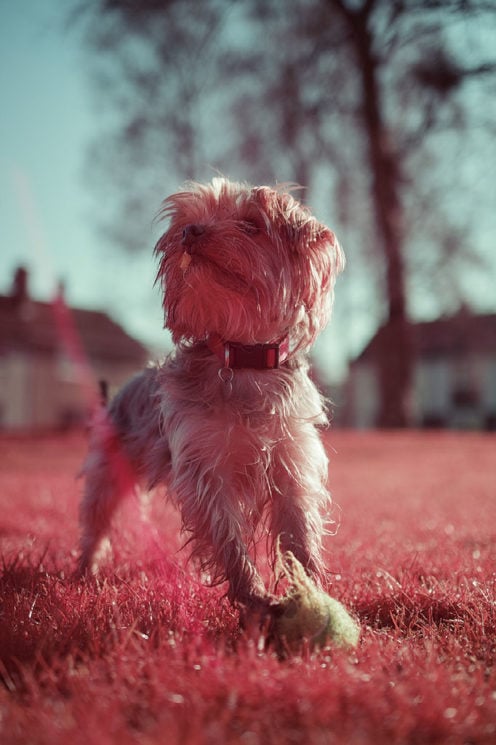 Using the filter with the Cinema color mode even allows some sort of normality back into skin tones like with this quick photo of my son using the sdQ-H with 70-200mm f2.8 Art. 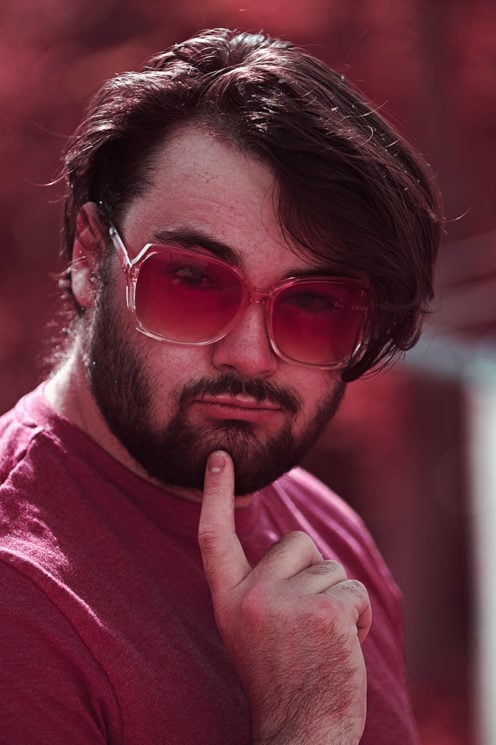 Fabrics tend to take on a red or pink hue particularly if they are a darker color like my son’s black shirt but to better demonstrate this here’s a photo from Glasgow when it was OK to walk around the city. 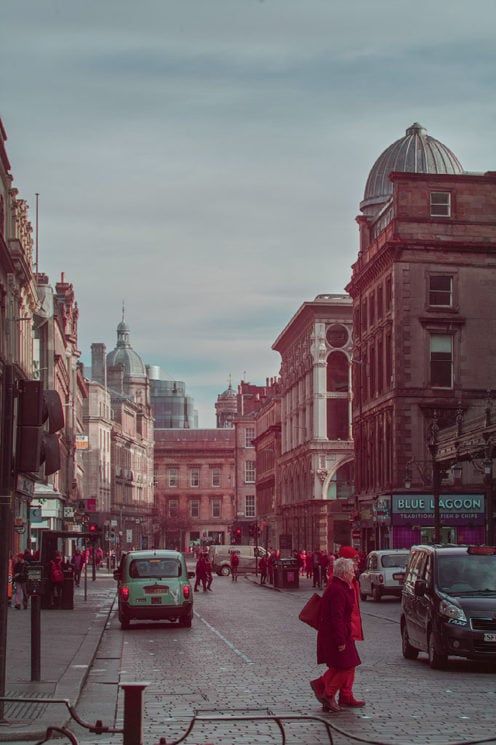 It sort of looks normal but alien at the same time, notice almost all of the fabrics are bright red and we still have true black from painted metal.  It’s not going to be a look you want all the time but I find it interesting and fun to see the world in a new way.

You don’t need a Sigma camera to do this although the Foveon chip has advantages as it captures light in three layers often resolving more detail.  Most of the light information will be lacking in the green spectrum in particular which makes up half of a traditional Bayer sensor color filter.

The cheapest way to try infrared photography would be to mount an infrared filter onto an unconverted camera. Here’s an example from my  Sigma fp where adding the Zomie 720nm Infrared filter required 11stops of extra exposure.

Many people buy a cheap mirrorless camera to get converted as a DSLR optical viewfinder won’t work with an Infrared filter that blocks all visible light.

Personally I’m happy that I can simply remove and replace the IR-cut filter whenever I want and it would be nice to see more camera manufacturers offer the same feature.

I hope you all enjoy this article – keep safe!