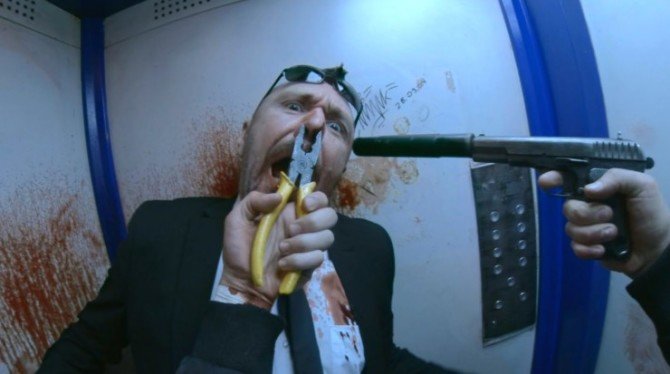 Shot almost entirely on GoPro cameras, and several years in the making, Hardcore Henry is hoping to set a new standard in action movies.

Described by Engadget as “A mix of Jason Bourne, Captain America, and Call of Duty”, it definitely looks like it’ll be different from pretty much every action movie we’ve ever seen so far.

While we’ve seen the idea before as short sequences in movies such as Doom, designed to mimic the game upon which the film is based, this is the first time an entire movie will have been shot from this perspective.

The film starts with our hero, Henry, waking up in a strange hospital with no memory of who he is or what happened to him.  A doctor, his wife, claims to have brought him back from the dead as a cyborg.

Shortly after, you’re being shot at, your wife is kidnapped, and almost everybody you see is trying to kill you.  While not based on a video game, it sounds like exactly the sort of premise you might expect from one.

Some of you may remember Biting Elbows‘ “Bad Motherf**ker” music video (definitely NSFW) floating around a couple of years ago, which initially served as proof of concept for Russian film maker, and Biting Elbows lead singer, Ilya Naishuller.

Since that first short film, Ilva has developed various methods for mounting GoPro cameras onto actors in order to make Hardcore Henry a reality.

He had to come up with his own solutions when the commercially available or common DIY options failed to yield the results he desired, and lists a number of issues on his website.

The default GoPro head bandage is awful. You won’t film anything but shaking with it. Besides that, if you’ll attach GoPro to your forehead and bend forward, the camera will capture only half of your body. 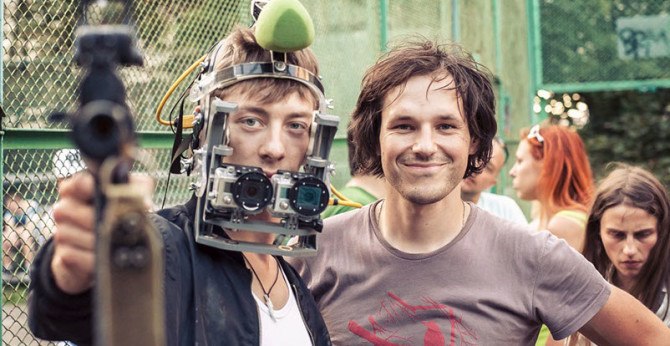 Many extreme sportmen have realized that the bandage is crap and started to hold cameras in their mouths.  That excludes the shaking and allows to film with the right angle.  But you can’t speak, you drool and your jaws hurt.

Motorcycle, hockey, rugby and other helmets allow you to attach camera to the right spot.  But unfortunately these helmets aren’t designed for filming […] you can’t film the stunts looking through the visor of heavy helmet.

The mount has evolved since then into something much lighter weight, and Ilva’s latest iteration of his “Adventure Mask”, includes 3 axis gimbal stabilization.

Here you can see a prototype of the 3 axis gimbal stabilization in action.

You can even buy your own Adventure Mask.  It is currently available for preorder, addresses many of the issues mentioned above, and certainly looks like an improvement to me.

So, if you’ve been thinking about making your own first person shooter movie, or you just want something a bit better than a head bandage to mount your GoPro for recording your extreme sports or similar adrenaline inducing activities, there’s a new player in town.

I’m not sure how I feel about sitting there for an hour and a half watching a movie filmed entirely in the first person, but I’ll be sure to take my motion sickness pills, just in case.

What do you think?  A neat idea that’ll turn into a Hollywood gimmick and disappear after a couple of years, like The Blair Witch Project’s camcorder style?  Or with headcams and bodycams starting to become more prevalent in the real world, could this become a new standard technique?

Hardcore Henry is set for general release in on 8th April, 2016, with some countries being released on various other dates around that time.

« How to create a sunset effect in Photoshop
Always Be Prepared »