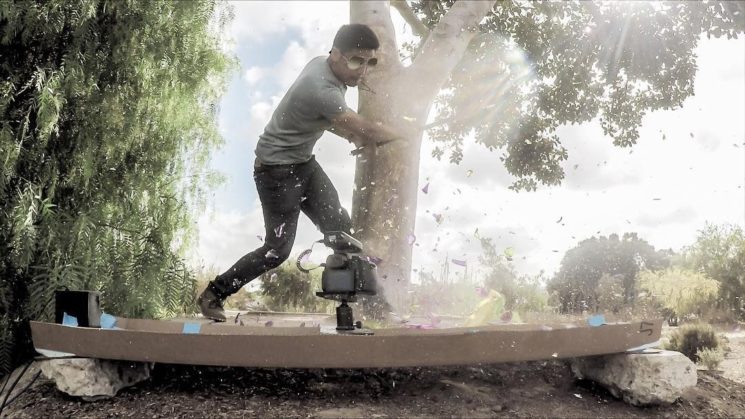 We all remember The Matrix and Neo dodging bullets. It inspired many enthusiasts to create the bullet time effect on the budget, and there have been some pretty creative solutions. Photographer and filmmaker Daniel DeArco has made the world’s fastest camera slider, which alone is pretty impressive. But he also paired it with slow-motion shooting, in order to get the effect similar to the bullet time. The result is awesome, and he shares some sample shots and the BTS video.

Daniel has created the prototype of this slider and has been testing it extensively. When he pairs the high-speed camera movement with the high frame rates, the results are pretty impressive!

When asked why he built a slider like this, Daniel explains that he shoots a lot of action and movement. He says that the most exciting things happen in a fraction of the second, so he got the idea of “shooting high speed in high speed.” Or in other words, he wanted to shoot high-speed movement in high frame rates. This allows him to create kinda Matrix bullet time effect, but with a single camera. Also, it lets the camera change perspectives without faking zoom in post.

Daniel also shares some outtakes from the video above, where you can see more about the process, as well as some bloopers.

In the outtake video, he mentions the speed of the slider. In the scene with colored powder, the slider moves from point A to point B in 0.2 seconds. Pretty cool, right? Daniel points out there’s some shakiness to the video because he only had a ball head mount at the time, and not a fluid head. Still, the results are great, and this slider opens new creative possibilities – on the budget.