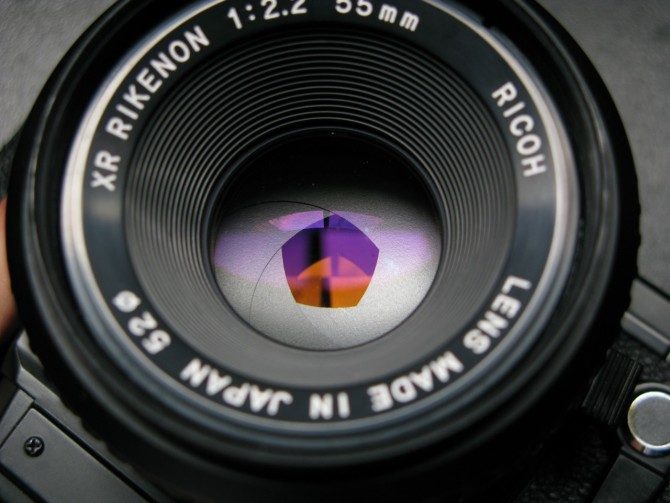 I got an email the other day that got me thinking. A guy simply asked “How far do I have to stop down a lens to get maximum performance. I’ve heard two stops from wide open. I’ve heard down to f/8. Which is correct?”

I asked him which lens he was referring to, and was he talking about the center point, corners, or overall. He didn’t realize that it mattered. He thought all lenses were the same and had this idea that eventually there was an aperture where the lens was maximally sharp and the corners were as sharp as the center. At this point, I realized there was no way I could tell him everything he needed to know in an email and I decided to write a blog post about it.

For purposes of this post, I’m not going to get into diffraction softening very much. That’s discussed all over the place. I’m simply going to look at what’s going on with your lens and explain why different lenses are going to improve differently when you stop them down.

For those (and you are many) who don’t like to read here’s the quickest summary:

The general rule that lenses get much sharper stopped down two stops from wide open is generally true.

And here’s the not quite as quick summary:

Center sharpness is usually nearly as good as it gets two stops from wide open.

Edge and corner sharpness often continues to improve for 4 stops or more.

This is just an example of what happens when we stop down different lenses. I picked two 35mm f/1.4 lenses: theCanon 35mm f/1.4 (Mk I version) and the Sigma 35mm f/1.4 Art. Canon fanboys, save your ‘Not fair, you should use the Canon 35mm Mk II‘ complaints. This isn’t a contest, I’m just trying to make a practical, everyday point, not fuel your silly ‘my lens is better’ arguments. (Those of you who do thorough graph analysis will notice a little weirdness between f/1.4 and f/2 because the f/1.4 curves are 10-lens averages, while the stopped down MTF curves are each single lens examples.)

Wide open it’s pretty clear the Sigma has the better MTF curve. (Learn how to read an MTF chart here) 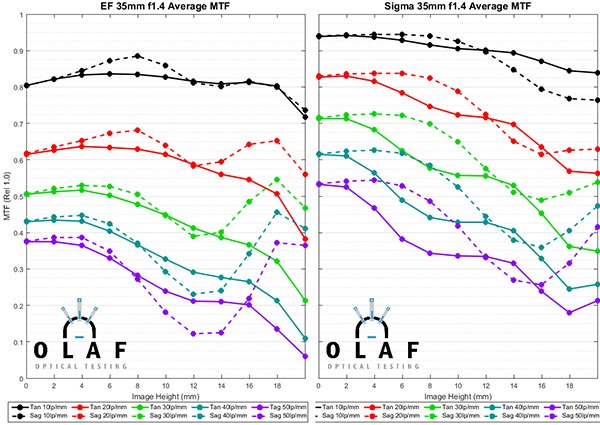 Stopped down to f/2 both of the lenses improve, but the Canon much more than the Sigma. Notice particularly how the Canon makes a huge jump in center sharpness with just one stop of aperture. 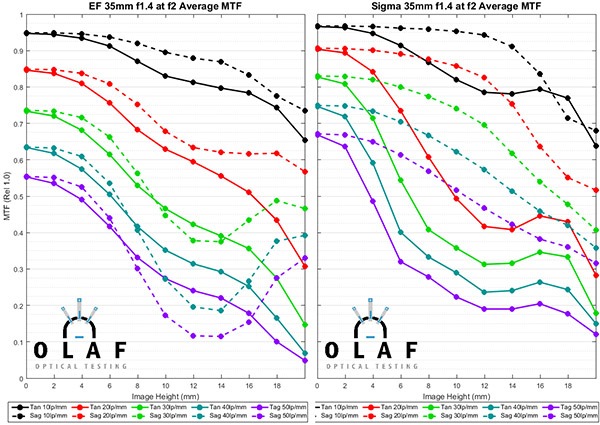 Two stops further down both lenses are even sharper. If you look you’ll see the Canon is improving most in the central area of the image circle. Away from the center, the sagittal and tangential curves are improving differently. If you look about 14 mm from the center (0 on these MTF charts) you’ll notice astigmatism is actually increasing. 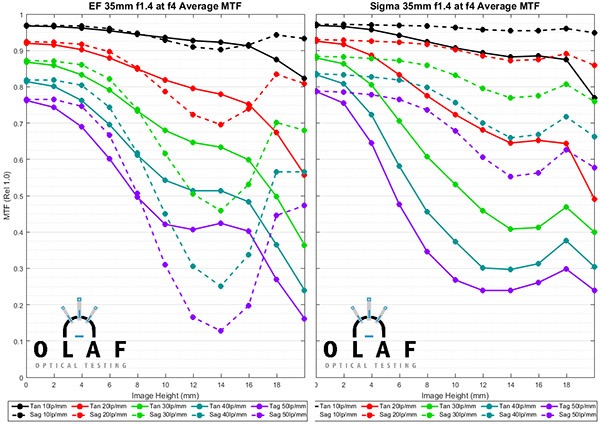 By f/8, you actually start to see a bit of a drop in the center of the lenses, but they are still improving off center, although in slightly different ways. 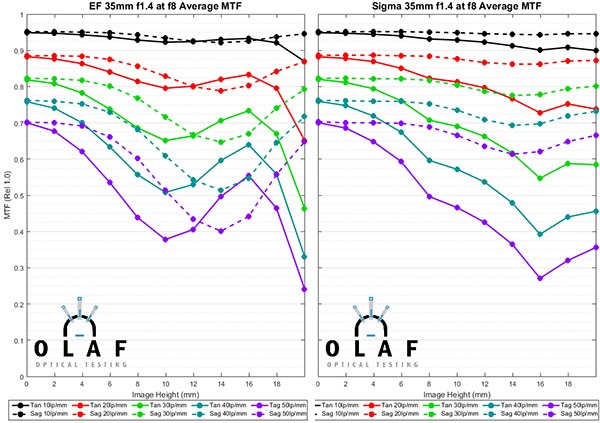 At f/16, we are starting to see a slight drop in resolution across the image but the MTF is now fairly even from center to edge. Even at f/16, though, there’s still a difference between the two lenses way out in the edges with the Canon still having a bit more drop-off in the tangential curves. 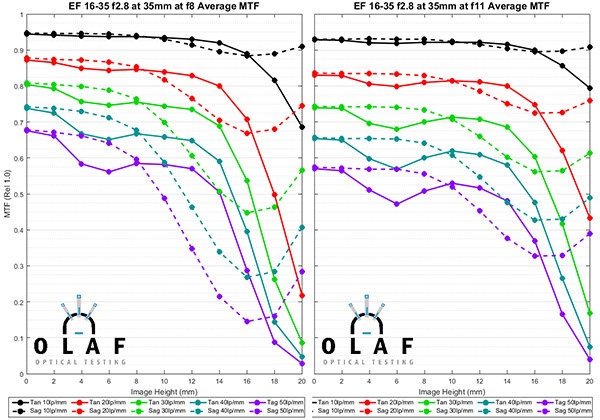 Each kind of aberration responds differently to change in aperture and to the distance from the center of the lens. Table 1 lists some of the more common aberrations. (There are a lot more. In some complex lenses, 7th and 9th order aberrations are sometimes as significant as the aberrations I’ve listed here.)

Some aberrations, don’t change at all with stopping down and their severity is simply a factor of distance from the center of the lens. Distortion and lateral color, for example, do not improve as you stop down. Shoot at f/16 and they are no different than they were at f/1.4.

Every lens has somewhat different aberrations. Different aberrations affect things in different ways. Some might have more effects on high frequency (40 or 50 line pairs/mm) MTF; others on low frequency. (Just so you are aware, a lot of knowledgeable people call most edge and corner blurs ‘coma’ even though they are often combinations of coma, astigmatism, and most commonly oblique spherical aberration. Unless you know a lot of optical theory and examine the blur of points of light at various distances and apertures, you can’t tell exactly which aberrations are causing this so-called ‘coma’. Why does it matter? Because stopping down improves that ‘coma’ by varying degrees depending upon what it actually is.)

The bottom line is stopping down improves center sharpness greatly – after all distance from the center point is nearly 0 so there is very little effect from the distance. A lens with a lot of spherical aberration, like most wide-aperture double gauss designs, will make massive improvements within a stop or two from wide open. Other lenses improve more slowly. Away from the center, though, things are more complex. The edges will never get exactly as sharp as the center, but they will get close. Depending upon the lens and what you are shooting, ‘close enough that you can’t tell the difference’ might be within two stops or might be never.

Of course, what matters is what it looks like when you take a picture. But pictures are complex things with lots of variables. To simplify things a bit we took the two lenses from the MTF charts above, the Canon 35mm f/1.4 Mk I and the Sigma 35mm f/1.4 Art and put them on our Olaf machine. This basically shoots 5-micron wide pinholes of light through the lens and lets us examine what that pinhole looks like on your sensor. 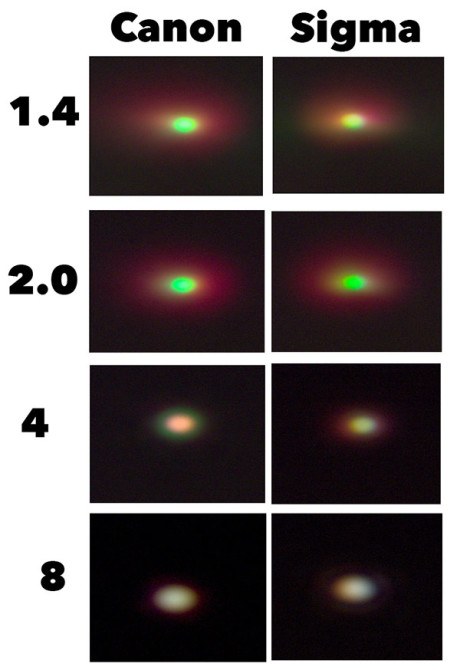 While the dots are never absolutely perfect, you can see that at f/4 they are pretty close, with just a bit of halo around the edges. At f/8, the halo is largely gone but the dots have gotten a bit larger.

Now let’s look at that same dot about halfway between the center and lateral edge of the image. 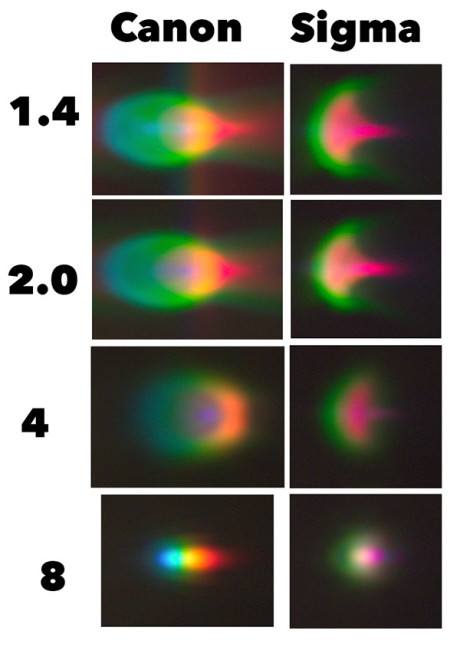 It doesn’t look much like a tiny, white dot, does it? And really between f/1.4 and f/2 you have to look pretty closely to see any improvement. At f/4 it’s clearly better, but still not very ‘dot-like’. At f/8, the Sigma is getting rather dot-like, and the Canon is pretty close, although it is providing us with a great example that stopping down doesn’t improve lateral color very much. (Just so you’re aware, the dot is smaller than a pixel when you take into account Bayer filters and such, so even a slightly smeary dot on OLAF may be a sharp dot on your camera.)

And finally, here’s the dot way over on the edge of the image. I should point out that with these images my intent was to crop a single dot’s aberration; doing so moved the center of the dot a bit in the f/8 images. 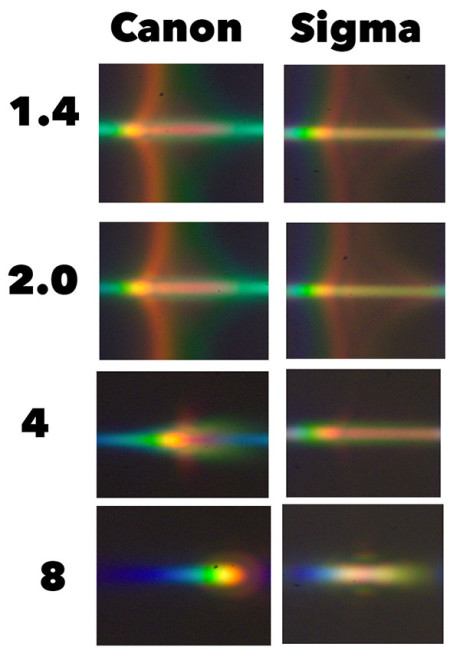 The point that should be taken from these edge images isn’t so much the specifics. It’s that you see certain aberrations improving by f/4 although even at f/8 we still have some obvious aberrations left. It should be apparent, when you look back at the table, that there are aberrations that are much more affected by distance from the center than by stopping down the aperture.

As I mentioned earlier, I picked out these two lenses to just be examples, not to have a contest. We’ve done stop down testing on a number of other lenses, although not most by any means. I’d love to give you a quick summary of how lenses all behave; something like f/2.8 primes are sharper at f/11 than f/1.4 primes. Or that they are the same. Or anything, really. But the truth is we haven’t found any patterns which are that simple, other than the generalities we mentioned above: lateral color and distortion won’t be any better stopped down, and astigmatism and field curvature won’t be much better. away from the center.

The simple reality is that if you want to find out which 35mm or 50mm is sharpest in the corners at f/8 you actually have to compare them or look at a testing site that has good stop-down data.  Don’t make assumptions because assumptions will always end up biting you.

Before you ask, we’ll probably do some of this testing and we’ll publish it when we do, but remember, we aren’t a review site and we can’t afford to do everything. For us, every aperture we test at takes just as long as the original wide-open testing data. Lenses are many, and we are few so the choice is usually ‘test 5 lenses wide open or test one lens at 5 apertures’.

Roger Cicala is the owner of Lensrentals.com. The article was also posted here and shared with permission. You can visit LensRentals over at their shop, facebook and Twitter.

For the first time in years, camera and lens production actually increased in 2017

Canon’s upcoming 24-105mm RF lens actually has a pretty slow f/4-7.1 aperture
« A look into the personal life of photography mogul Peter Lik
Under-Cats Reveals the Lesser-Known Side of Cats »