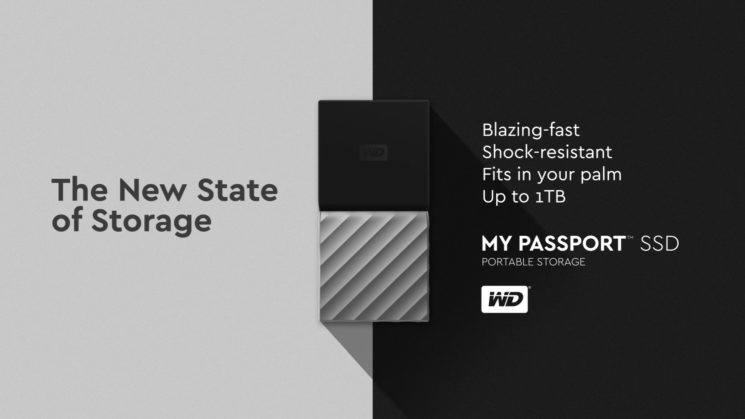 Many thought Western Digital were a bit stuck in the times, clinging onto HDD technology. All the others were making the big push towards solid state, especially Seagate, and WD seemed to lag behind. Then, last year, Western Digital completed its acquisition of memory card manufacturer, SanDisk.

Now, Western Digital have unveiled its first portable SSD; The My Passport SSD. It’ll come in three capacities of 256GB, 512GB and 1TB, with a Type C USB3.1 interface. Set to compete directly with the Samsung T3 line of mini portable SSDs, it could see the prices dropping sharply over the next little while.

As mentioned the drive is available in three capacities, at three prices.

Western Digital say the new drive is the fastest they’ve ever released, with speeds up to 515MB/sec. It’s also back compatible with more traditional USB Type-A ports still used on most desktops with USB2.0 and USB3.0.

It’s built to withstand a drop of up to almost 2 metres, offers automatic backup, and is compatible with Apple Time Machine. It works with both PC and Mac (although it may require a reformat), and offers hardware encryption.

There’s no word yet on exactly when the drives will become available for sale. You can sigh up for notification on the Western Digital website.