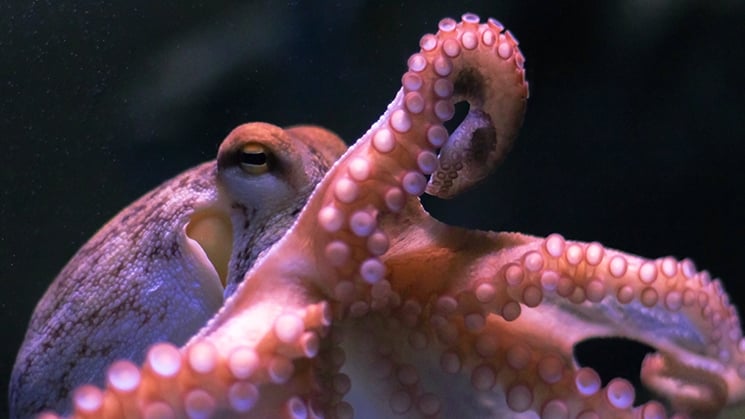 Octopuses are interesting and intriguing creatures in more than one way. While they have some unique bodily traits, like three hearts, they also keep surprising us with their remarkable intelligence. They have characters, they can be mischievous, and they can even recognize faces. And if your face is a friendly one – you may even get a hug.

This is exactly what happened to a group of divers from Campbell River, Canada. As they were exploring and photographing the underwater world of the Salish Sea, they encountered a rare giant octopus. The animal wasn’t only eager to pose – it even gave one of them a “hug,” and it was all caught on camera.

A high school teacher and photographer Andrea Humphreys took a group of friends for a dive to show them the beauty of the region. But other than admiring the underwater world, they were on also on a mission to find a rare giant Pacific octopus. “People say it’s dark and gloomy here. But when you’ve got lights, you see every colour of the rainbow,” Andrea told The Guardian. “I’ve completed more than 675 dives and I think this is some of the best diving in the world,” she said. But this particular dive turned out to be more special than the nearly 700 ones she had done before.

Andrea and her friends spot the animal they were looking for, and Andrea notes that it’s very rare to see them out in the open like that. As one of her friends had never seen an octopus before, it was a precious moment – but then it turned even better. The curious animal approached him, wanting to get to know him. It carefully felt his arm, and then crawled on him, exploring his mask and his face.

“I was just taking pictures as I was so excited for him,” Andrea explains. But then the friendly giant turned its attention to her. “It was just crawling on my camera, crawling on my lips, giving me a hug. These huge tentacles were up over my face and mask,” she said. “Every time I backed away from it, the octopus just kept coming towards me. And it was just so amazing and inspiring.”

Andrea said that the octopus stayed close by for the next 40 minutes or so. She kept inspecting her dive gear and her camera. It’s important to note that you can tell when an octopus is angry or scared because it changes its color to grey. However, this one kept its red color all the way through the encounter, never showing any signs of aggression.

After sharing her video on social media, it quickly became wildly popular. Andrea believes that the video got viral because it gives people a glimpse of “a fleetingly intimate and unlikely connection with a creature that often seems alien.” Indeed, how often do you see an octopus “hugging” a photographer? But even though octopuses are smart, curious, and can be super-kind, please don’t try to “hug” them like this yourself. Give them their space and pay them respect, and who knows, maybe they’ll surprise you with an act of affection.