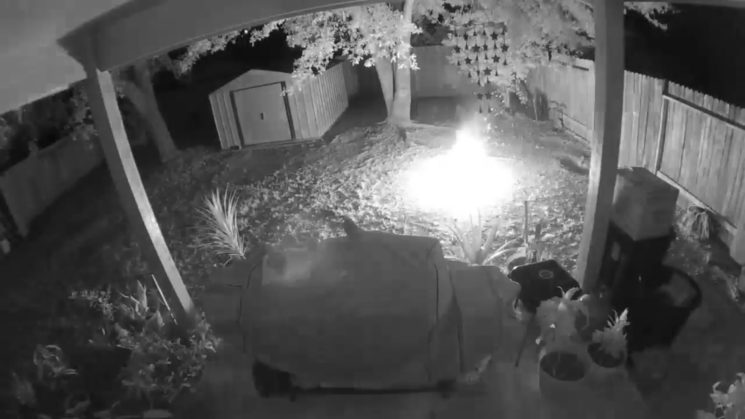 Lithium-Ion batteries are not to be trifled with. They can be very dangerous things, as evidenced by massive recalls from companies like Samsung and Apple. You have to be very careful when flying with them, and some devices aren’t even allowed on flights anymore. Manufacturers do everything they can to try to ensure their batteries are safe, there is always a risk that one can go bad.

One went bad for one photographer, though when he says his Flashpoint branded Godox AD360 battery exploded on him. He put his batteries on charge the night before a session, as many of us do, when one of them started to swell. He unplugged it, and rushed outside with it, unprepared for exactly what would happen next. Fortunately, his security camera captured the whole event.

The events unfold over two videos. The first shows him rushing outside, clutching the battery in paper towels as he places it down on the grass.

So I’d thought I’d share this experience last night. I had a battery from my Flashpoint 360 explode on me last night. I use these lights for my portrait sessions where I shoot 300 plus students. Last night I was charging the batteries to get ready for today. One battery charged fine. The other battery swelled up. When I unplugged the charger which was hot to the touch as well as the battery, a mist of steam and a bad alcohol like smell was coming from the battery. I was thinking this is not good. I got some paper towels, grabbed the battery and put it outside in the backyard. Not thinking it was going to explode, it emitted horrible smell. See the videos to see what happened next.

The second video shows the battery exploding dramatically and then sitting there on fire on the grass.

This isn’t a Godox/Flashpoint-specific issue. This can happen with any lithium-ion battery. Perhaps there’s a manufacturing defect. Maybe cells get old and die. And sometimes a previously healthy battery can just develop issues due to the way they’re handled. We’ll likely never know what caused this battery to swell up and explode.

But it just goes to show that no matter what device you’re using, if it uses lithium-ion batteries, you need to pay care and attention to them, particularly when charging them. If he hadn’t gone to check on his batteries and noticed that one of them had swollen up, this could’ve been his house going up in flames instead of just a patch of grass.

You can decrease the odds of them exploding through simple chemistry by not leaving them fully charged or completely empty for long periods of time (like, weeks at a time). And if you’re not planning to use them for more than a couple of months, make sure to check on them every so often and top up their charge to around 40-50%.

Although geared more towards radio-controlled aircraft and vehicles, the video on this post offers some good tips for keeping your batteries safe while charging. And while it might seem overkill to charge your batteries inside a fireproof box, consider it insurance. Because if you ever do have a battery explode in your house when you aren’t around to do something about it, you’ll be glad it was contained.

How do you protect yourself against the potential dangers of lithium-ion batteries?