It’s not a secret that things like lasers and lidar can kill camera sensors. You get an intense beam of light pointed towards your camera, and then the lens focuses it into an even brighter point, frying pixels. But did you know that diffused reflected laser light can also cause this to happen?

Photographer Andy Boyd knows. He had to learn the hard way after filming a laser tattoo removal which very quickly and easily fried a bunch of pixels on the sensor of his Sony A7SII in a series of rapid laser bursts.

According to his post on Reddit, Andy believed, as many of us do, that reflected laser light, especially when diffused off something as relatively dull as skin, wouldn’t cause any harm to his camera’s sensor. And the laser techs didn’t mention anything to him about the camera, despite the fact that they were all wearing protective goggles themselves. Of course, I would imagine the laser techs are only really educated about human safety, not camera safety.

Generally, you are OK with diffused reflections if you’re shooting with a Class 3B or lower powered laser, like cheap laser pointers. But tattoo removal uses Class 4 lasers, which can absolutely damage eyes and camera sensors when reflected. They can also start fires, which is why it’s never advised to leave laser engravers unattended.

I actually have a 2500mW Class 4 laser diode module here that arrived recently for a project I’m working on. My laser goggles block out 190-550nm, making it perfectly safe to watch the laser as long as I’m wearing them. But I also need to film this laser in action soon. So I contacted the manufacturer of the lenses in my laser goggles to find out if I could get the same material in flat sheets, as I was concerned about this very issue and didn’t want to risk my cameras. 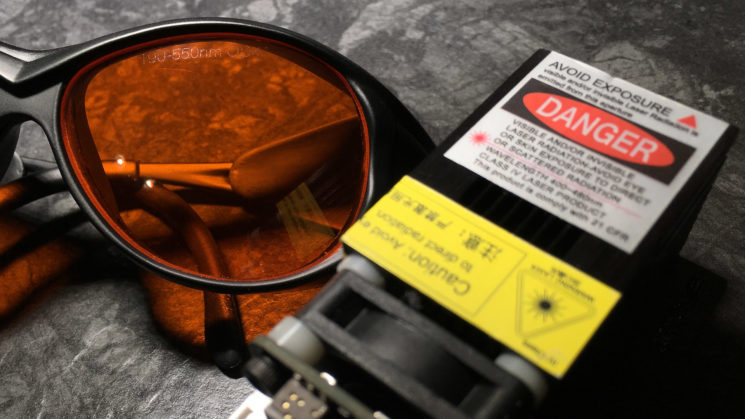 Fortunately, they were able to sell me a 100x100mm piece that fits nicely into a Cokin Z-Pro holder. Also fortunately, for me at least, Andy has proven that I wasn’t just being overly paranoid. Admittedly, tattoo removal lasers are a bit more powerful than my laser, but it’s not a risk I wanted to take. I still have to wait until it shows up before I can film, though.

Andy, on the other hand, was not so fortunate and likely has an expensive repair bill coming up.

Be careful out there, folks. Lasers aren’t good for your eyes – well, except, you know, for those ones that are good for your eyes – or camera sensors, even when their light is diffused & reflected if they’re powerful enough. So if you need to film lasers, find the correct wavelength goggles to block it out. Worst case, you can gaffer tape them over the end of your camera lens.

This short movie shows the difference between diffused, double diffused and hard light