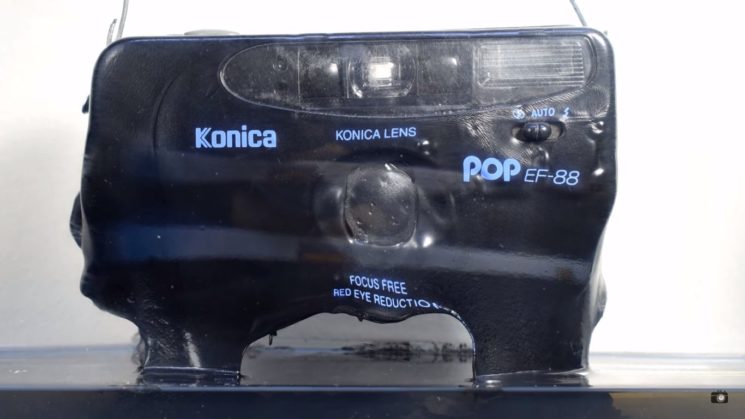 We’ve seen cameras tortured and destroyed in all kinds of ways: shot, smashed, and even chewed by ants. But it slowly melting due to the acetone fumes is somehow more… elegant.

The guys from YouTube channel Amazing Timelapse exposed a plastic Konica film camera to harsh acetone fumes. It turns out, the camera can’t survive them for very long, and it starts melting like the butter. It’s not as harsh as shooting or smashing. I can say it’s even oddly satisfying to watch.

The guys didn’t dip the camera into acetone, but they placed it directly above. They filmed it over the course of 25 hours but crammed it all in a three-minute timelapse. Even though the very process lasted much longer than the video, I still find it quite fascinating that the entire camera can dissolve just from acetone fumes in a single day.

Other than melting butter, this video reminded me of a several trash horror movies I’ve seen. But also, it served as a reminder to never ever keep acetone anywhere near gear. Just in case.

How To Build A Butter-Smooth Video Slider

How to melt your camera sensor shooting the eclipse

Yes, microwaving a DSLR causes it to melt into a horrible mess