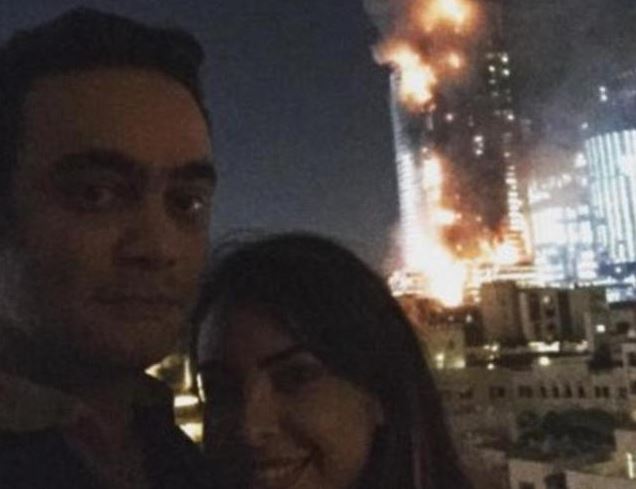 As millions of people around the world were gathering to watch the New Year’s Eve fireworks extravaganzas, a fire broke out in a Dubai skyscraper near the iconic Burj Khalifa – the world’s tallest structure and the highlight of the city’s upcoming fireworks display.

As the fire spread so did the photos and videos spectators posted online, but one couple decided to take it a step further and took a selfie with the burning building in the background.

While most viewers spoke out against the couple and some gave them the benefit of the doubt that perhaps they don’t know the difference between a burning skyscraper and a massive fireworks display, the online community did not appreciate the smiling selfie.

When Dubai does something, it does it in the biggest and most impressive way. So, after smashing the world record for the largest fireworks display in 2014 with 479,651 shells in just six minutes (1,332 fireworks per second!), people were obviously expecting another record-breaking spectacle this year.

Stealing the show, however, was the 63-floor luxury Address Hotel with the blazing flames that engulfed its exterior just hours before the fireworks display.

As the word spread on social media, the hashtag #DubaiFire was created and caught on as fast as the fire itself. Among the various photos was the controversial selfie.

The photo was captioned “Happy New Year My dear Dubai. May God bless you and keep you safe. You always surprise us with the biggest fireworks”, and is very possibly the user’s profile is currently set to private. 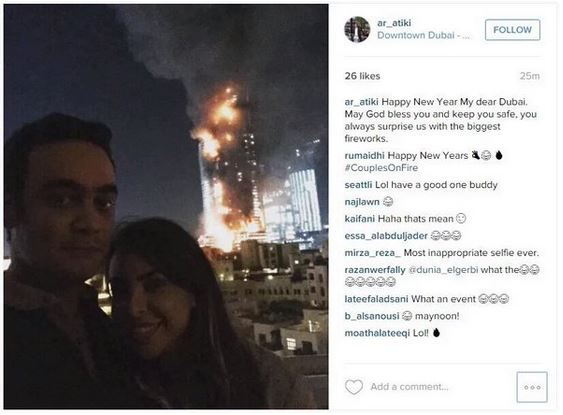 Unsurprisingly, the photo drew a lot of attention, mostly negative:

Those IDIOTS who took a selfie with the burning hotel behind them, SHAME ON YOU! Think of the innocent people inside that hotel!! #DubaiFire

2015 was a very eventful year when it comes to selfies. We’ve seen an airplane grounded due to a selfie, a husband jailed, a man bitten by a rattlesnake, and an attack on ISIS. A martial arts school promised to turn students into selfie ninjas, Russia had to launch a ‘Safe Selfie’ campaign and a couple of guys followed great white sharks to get a selfie with them, just to name a few.

We’ve also seen the dumbest, most embarrassing and fatal selfies, but is this the most inappropriate selfie of 2015?

For those wondering, the fireworks display went on as usual despite the fire: