Vela Labs developed an LED flash with speeds of up to 1 /2,000,000 of a second – the Vela One. This means that the Vela One is fast enough to stop a bullet in flight.

Vela Labs CEO, Matt Kane, told us that such a fast speed is obtained by using ultra-high flux COB LEDs, and overdriving them. My first question was how exactly can you push an LED so brutally and not damage it. Matt explained that the massive currents are delivered in very short pulses and do not damage or shorten the life of the unit.

And you definitely do not want to damage the unit… its beautiful! Its powder-coated aluminum chassis has 9 ultra-bright LEDs behind a debris-resistant polycarbonate screen. Here is their kickstarter pitch:

More specs on Vela One 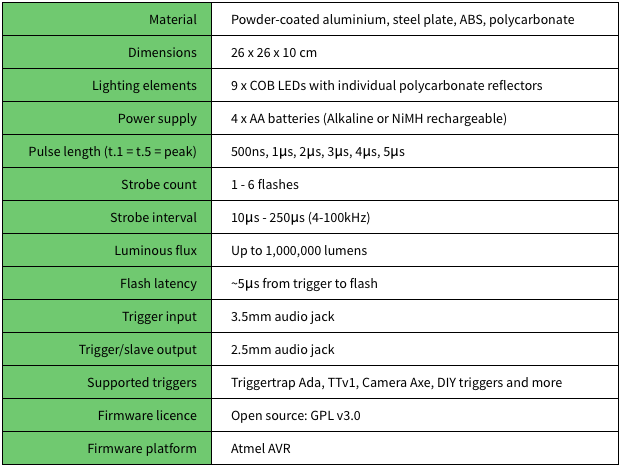 High speed photography is not an easy task and takes power. A speedlight can fire at 1/20,000 second and that can stop the motion of a water droplet or balloon popping, but a bullet would still smear.

Speedlight Vs Vela One

We have seen other uber high speed flashes like the Air Gap Flash V1 – it uses AC power and it’s quite big. Vela One runs on 4AA batteries and according to Vela Labs, will run all day with recycle times less than a millisecond! This comparison should help you make sense of the differences.

Looking at the Vela One as it backlights

This is a pretty interesting offer from Vela Labs as Previous offerings of High Speed flash were about $2,000 and could probably stop your heart is used incorrectly – early bird prices start from £450 (around $700), with full Kickstarter price £550 (around $860).

[Vela One at kickstarter]

The DroneDefender aims to neutralize drone threats and illegal activity

Reveni Labs is back with a new teeny tiny spot meter

$500K High-Speed Trigger Project Funds. Pulls Back After A Year. Owner Is Taking Responsibility
« Brooke Shaden Explains How To Light Portraits With Nothing But A House Lamp
Photographer Captures Stunning Images of Naked Free-Runner in London [NSFW] »