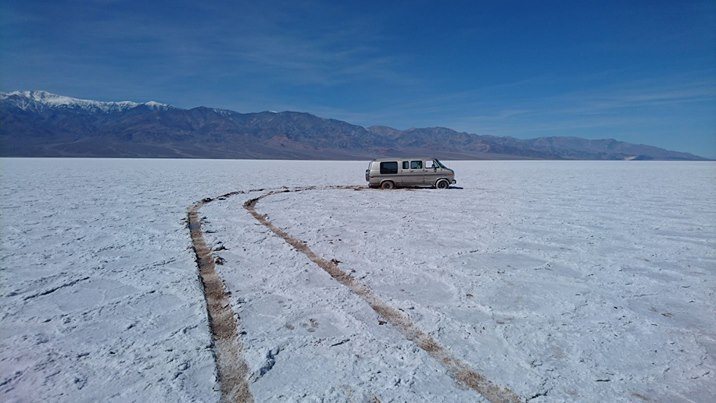 Last week, photogenic and protected salt flats in Death Valley National Park were damaged.  A van driver left drove off a half mile off Badwater Road, leaving tracks in the salt flats. After doing this, he or she just left the vehicle there and left the site. And unfortunately, the tracks are not the only damage caused by this recklessness.

Two days later, the National Park Service towed out the van using a tracked vehicle. As you can imagine, this caused even more damage to the salt flats. But according to the Park’s executives, the tow vehicle’s tracks left less impact than the van’s tires would have. One of the options was to remove the vehicle by using a helicopter, but it would have been too expensive.

The damage is not beyond repair, but it will take quite an amount of time to and work to smooth the tracks over and regrow the salt. What’s more, Death Valley applied for a 3-year grant to fund the restoration of damage done by vehicles driving off the road.

We’ve seen and reported different kinds of vandalism and disrespectfulness towards landmarks. Sometimes for the sake of taking photos, and sometimes just for being a dumbass. I believe this one falls into the latter category. It seems like someone didn’t need the old van any longer, so they thought: “Hey, why don’t I just leave it in the middle of the protected National Park area?” I may be wrong, but whatever the reason is, I can’t find an excuse for doing this. And it seems that the law can’t either.

The driver hasn’t been charged yet, but he may face up to $5,000 fine, up to 6 months in jail, or restitution charges for the tow and restoring salt pan. So, I guess that’s the price you pay for being reckless and disrespectful.