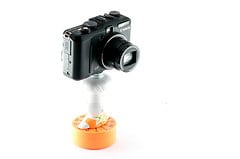 We have had a post before where we shoed how to use a canon G9 camera and a bunch of opensource photography software (mainly CHDK) to create amazing timelapse movies.

This time we are taking it up a notch and adding some movment to the movie. The idea is simple, using a mechanical kitchen timer (I used a fancier one :) and a bolt we created a rotating camera. Movie with tutorial and samples after the jump.

Since I as still living in a construction site, I took a a few quick test pans of the workers (well, quick to the extent that they were about 15-30 minutes long)

I used a G9 for this, but apparently the newer G11 is also supported by CHDK (as well as a bunch of other point and shoots).