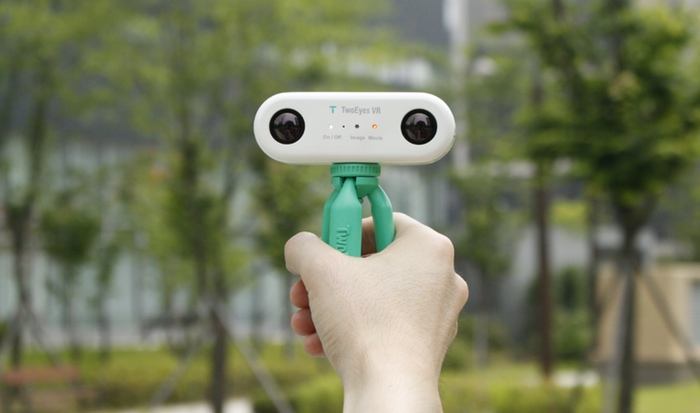 Our eyes work together to see the depth and enable us to get the feeling of space. TwoEyes VR is the first binocular 360° VR 4K Camera that mirrors human eyesight. It allows you to shoot stunning 3D, 360° or Virtual Reality content with two pairs of lenses that imitate what you see with your eyes.

The camera uses two pairs of lenses, spaced apart 65 mm – which is the average distance between the pupils of human eyes. TwoEyes VR can record both 180 and 360° videos in 3D, whereas recording 360° video with just one camera doesn’t produce 3D footage.

TwoEyes VR offers two modes. If you hold the camera vertically while recording, it will film utilizing only two lenses in “One-eye Mode.” Essentially, this will film videos in the same way as other 360° cameras on the market. If you hold the camera horizontally, it will record with all four lenses in “Two-eyes Mode.” The embedded gyro sensor will automatically detect how you are holding the camera. In “Two-eyes Mode” you will be capable of recording stunningly realistic 3D video.

TwoEyes VR enables you to create livelier, deeper and more realistic 360° videos. The two pairs of lenses on this camera process the 360° view in a unique way, so you can also create more real 3D VR content. This means you can film your own VR videos and experience them with a VR headset. The camera also supports generating red-cyan 3D footage, so you can also enjoy the content through a 3D TV.

You can access the videos through your smartphone and Wi-Fi connection and share them on social networks. The camera is light, compact and easy to use, so you can take it everywhere and easily share your vision of the world around you.

The TwoEyes team has started a Kickstarter campaign which has already exceeded the required amount. You can preorder a ‘Kickstarter Pack’ for $239 and get a TwoEyes 36o camera and shipping anywhere in the world. The estimated shipment date is August 2017, and if you’d like to order your piece, you can do it here.