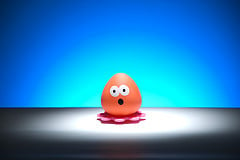 As you probably noticed, there is a certain background setup I’ve grown to like in the last few weeks.

It is a setup that produces a nice circle in the background. You can see it in the gridspot article, My Ode to PSU and the shot I took to be the icon of the Babies series. You can also see it used on a large scale portrait here.

I like this circle effect for several reasons. The first and obvious one is that a patterned backdrop is more interesting then a “flat” background. Of course, that does not mean that the shape has to be a circle, it can be a square, a diagonal line or just a random pattern. However, circles are nice, symmetric and round.

The second reason is that a circle brings your focus to the center of the circle where you can place your subject or model. For this I place the model / object in the middle of the circle, and usually break the 2/3 rule and place my object dead center.

So, How to create this type of background? There are actually two ways to do it. While both methods use a sheet of gel and a lighting modifier, they are different both in result and in the underlying mechanism that created the circle. 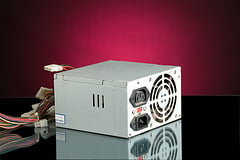 The Idea – Let’s restrict the light that comes out of the flash to a tight beam of light. A cone of light if you will. Now when that cone of light hit the backdrop it will create a circle or light.

The physics of this method is that the light will not go astray and contaminate the area which is out side the circle of light created where the cone of light meets the backdrop.

The second control you can employ is changing the gridspot. This is actually more about light restriction then backdrop coloring. Making a longer gridspot will create a tighter circle. You will also get a tighter circle if you use a gridspot with narrower “channels”.

Results -The thing that characterizes the color circlet cast by the grided flash is the relatively crisp edge of the light. Even at a longer distance. 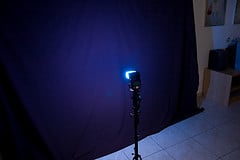 The Idea – OK, I’m gonna spill some physics at you now. The general idea is to position the flash in a way that there will be an impact to the distance of the flash from the background. How can we do this? If we place a stofen

box on the flash. Now, placing a stofen on a flash does exactly the opposite from a gridspot it throws a sphere of light in all directions (it is also called bare bulb flash). If you place the flash close enough to the backdrop, you get an interesting effect. The places where the flash is close to the backdrop will be illuminated more then the places far from the flash. Hoe much more? This is where physics comes in. It work that by doubling the distance you reduce the light intensity by four. This is called the inverse square law.

It means that the light fades off pretty quickly from the center – the height of the flash – to the edges. This drastic falloff creates a circle of light. 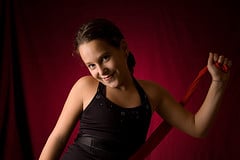 The thing about this technique is that you must bring the flash really close to the backdrop to work. Otherwise the distance from the flash to the entire backdrop is kinda the same, so there will be no circle.

Results – Results here are great, and provide a circle with a nice fade off. As you can see in the image on the left, the falloff is very smooth. To get this I placed the flash about half a meter from the backdrop. It is hidden by the beautiful model.

5 Ways To Get Creative With Seamless Background Paper