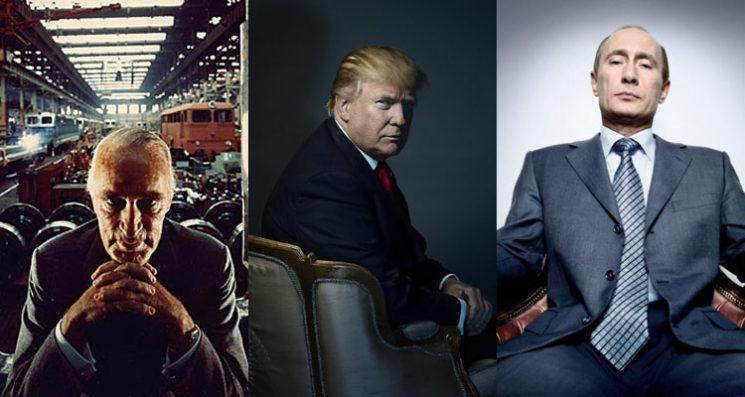 The perceived devil horns grabbed the headlines, but the real story behind the deep symbolism embedded within Time Magazine’s 2016 person of the year cover featuring Donald Trump is much more interesting.

Nadav Kander is a brilliant photographer and the impression of Donald Trump that you get from his photograph is unmistakable – following in a long tradition of using photography to influence perception – like Arnold Newman’s evil brooding image of Nazi industrialist Alfred Krupp, to Platon’s cold, inhuman portrayal of Vladimir Putin.

Kander’s treatment of Trump is subtle enough that supporters probably don’t see past a tough looking businessman, but the deliberate nuance to this image is delicious – so lets take a moment talk about this image of Donald Trump from a photography perspective.

First of all we need to understand that Time Magazine’s 2016 person of the year cover was meticulously planned. There is nothing in this image that was not deliberate – Kander’s image of Trump is crafted to tell the viewer a specific story.

If you’re not quite sure of the deliberacy behind this image of Trump, take a look at Kander’s portraits of Barack Obama – you get a very different impression of the kind of man Obama is versus Trump (your impression of that reality of course depends on your personal world view).

Even Kander’s portraits of members of Trump’s inner circle: Steve Bannon, Kellyanne Conway, Mike Pence and Reince Priebus don’t receive the same treatment as Trump – their stories are nowhere near as explicit as the story Kander and Time are telling about Donald Trump.

Here is the official story from Time about this portrait of Trump (with a few little sneak peaks at the setup):

The obvious story at the surface of this image is that of a successful, powerful, tough businessman – and Trump certainly embodies that narrative.

Trump’s expression appears confident and shrewd, like a person concentrating on an important task.

The viewer’s interpretation is dependent on the viewer’s world view – in other words, if you are a Trump supporter, or Trump himself, you’re probably going to look at this image, interpret the obvious story and come away with a positive impression of Trump the businessman.

Of course, the real story that this image is trying to tell is the opposite of the obvious.

I think George Takei totally nails the the negative subliminal cues present in this image (in under 140 characters too in his Tweet “Trump trolled by Time”):

But lets deconstruct the image further, from a photographer’s perspective.

In the pose chosen, Trump is looking back at the viewer, a superior who is far ahead – and therefore better than the viewer – and in the process of turning away from you.

Trump’s pose is especially interesting given that Trump is an elite billionaire, but he won the presidency by campaigning as a populist – the regular guy middle class Americans can relate to. However, Trump’s pose in this image is designed to convey the feeling of an elite with a palpable disdain for his inferiors.

Given the subliminal cues provided by Trump’s pose, his expression becomes a lot more ominous. Instead of seeing a confident business man, the viewer sees a man who is looking right at them with a neutral expression and a hint of a smirk – his intentions are not clear and his gaze is unnerving.

Next we have the prop – a tattered old gilded chair.

The symbolism that the chair conveys is such a powerful part of this image. At first glance (if you even notice the chair) you get the impression of wealth and grandeur. But with a closer look, the viewer realizes that the gold isn’t real and the chair is just tired, old, damaged and clearly past its prime – visual impressions that are transferred to Trump himself, and perhaps America in general (especially poignant since one of Trump’s biggest claims is that he’s not a phony – that chair says otherwise).

Then there is the lighting. Half of Trump’s face and body are visible to the viewer, while the other half is hidden in shadow. He is depicted as a man divided with a literal dark side. It is hard to mistake the symbolism there. An even more powerful subliminal trigger is the dark, sinister shadow brooding in the background. The blue gel on the fill light and blue in the background pallet finish the image off with a cold unfriendly tone – similar to Platon’s portrayal of Vladimir Putin.

Finally, if there was any doubt about intentions of the true story Kander and Time are telling about Donald Trump there is the caption “President of the Divided States of America”.

This single statement ties all of the positive and negative visual subliminal cues together into a neat concise story.

Do You See A Positive or Negative Portrayal of Donald Trump?

One thing that I love about photography is the ability to convey a complicated narrative with a single image – and that narrative can be extremely powerful.

In an interview with Getty, Arnold Newman said the following about his iconic image of Alfred Krupp:

I deliberately put a knife in Krupp’s back, visually. He was a friend of Hitler’s and Hitler let him use prisoners as slave labor. If the prisoners fell, he just unchained them and they went directly into the crematoriums in Auschwitz. Krupp’s people realized I was Jewish, and they were worried that I might not be kind to him. I was trying to figure a way to show who he really was without being obvious. I lit from both sides and I said, “Would you lean forward.” And my hair stood up on end. The light from the sides made him look like the devil.

Time will tell how Nadav Kander‘s image of Donald Trump will be judged, but there is no question that it is a powerful image telling an interesting story. I think the fact that even the most ardent Trump supporters see a conspiracy with devil horns speaks to the effectiveness of the narrative this image conveys (if he was portrayed in warm tones as kind and jovial we’d be talking about rabbit ears).

I also have to admit that I love the fact that photographers have consistently been able to portray some of the world’s most powerful people in a very unflattering way (if not brutally honest), without their subjects or their subject’s handlers realizing it at the time.

But, what do you see in this photograph?

Do you see Donald Trump the powerful, confident businessman?

Or do you see Donald Trump the shadowy, untrustworthy demagogue?

What do you think the photographer’s intention was with this image?

(And please, this is a photography blog so lets keep the discussion about photography).

I won something in this years British Army Photographic competition 2016

How my profile photo got severly trolled by my photographer friends