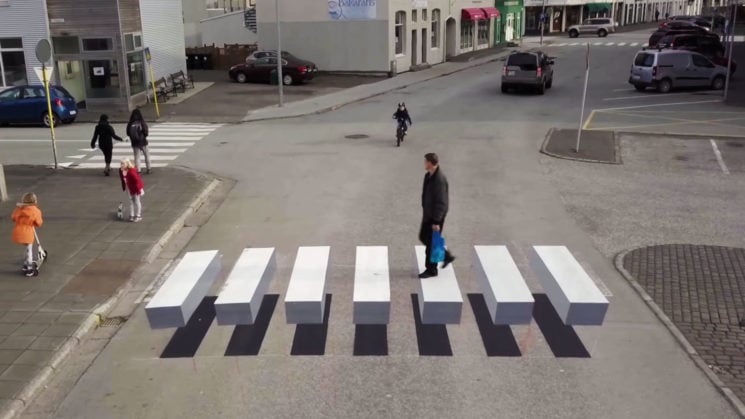 Of course, it’s not really floating, it’s an optical illusion. Painted on a road in the fishing town of Ísafjörður in Iceland, the crossing appears to float in the air. At least, that’s how it appears to drivers coming up the road. It’s sure to make those who haven’t seen it before think twice before speeding through it, especially if people are waiting to cross. Well, many of them, at least.

While not strictly photography related, optical illusions can have great effect in video & photographic work. They can provide an extra sense of dimensionality to flat planes. To trick the viewer’s mind into thinking they’re seeing something that in reality, is completely different.

One example of such an optical illusion being used for video, is this advert for the Honda CR-V a couple of years ago.

It’s fascinating to watch. You think you know what’s going on, what’s real and what isn’t. But you don’t know for sure until the camera starts to move and the visual magic is revealed.

Optical illusions like these have been used for decades in film, especially for things like matte painting. To simulate things like long corridors or huge warehouses behind actors on a smaller set. Forced perspective is another optical illusion commonly used in both photography and film.

Thanks to the lockdown, the iconic zebra crossing from “Abbey Road” finally gets a fresh coat of paint