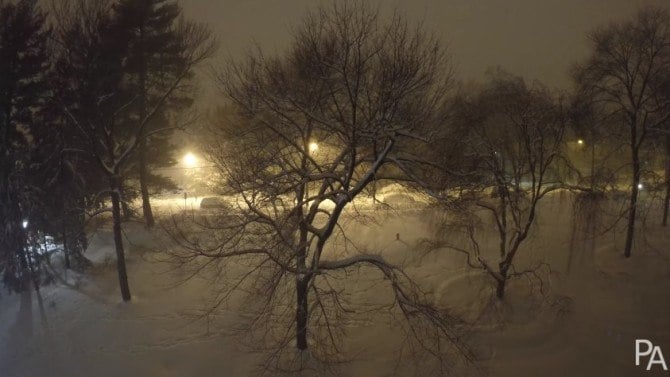 If you have not heard about Winter Storm Jonas hitting the US, you must have been hiding under a rock (which was covered in snow anyways). For some this meant that they had to stay at home and cancel plans. But for others, who planned ahead, this was a great opportunity to break out the time lapse gear and shoot a once in a lifetime movie as about 65 centimeters of snow covered the city.

While I am not envious of the people having to endure that amount of snow in such a short time, I think that those time lapses show how much gear that only 15 years ago was considered super advanced, has become common for everyone.

A great movie by Wayne Bennett shows a compilation of about 800 photos with an interval of 2 minutes covering a man-high skeleton.

Todd Hayward shot over 3,000 photos in Virginia with his GoPro Hero 4 covering about 24 hours

Shlomo Nosson Rotberg placed a camera on his basement window, shooting the street. Sadly, by the time he was done, all the cars were almost fully covered with snow

Paul Armstrong has wonderfully composed over 24 hours of snow in

« A Metal Ball Bounces off The SIGMA WR Ceramic Filter; Said To Be 1000% Stronger Than Other Filters
Watch out Ice Light: Yongnuo announces the YN360, a full color LED light wand »