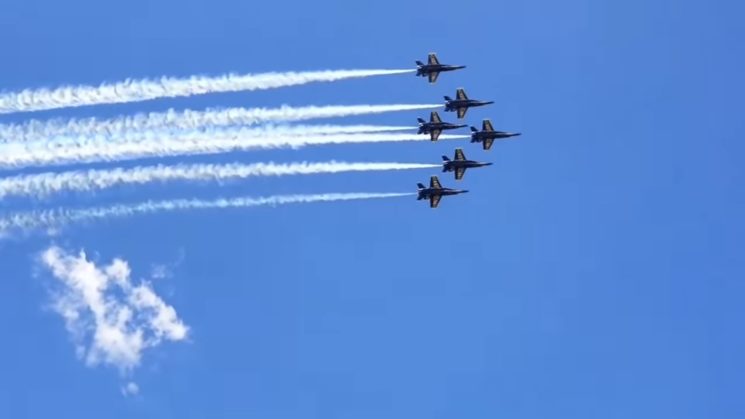 A drone video shared online has caused quite a stir over the past few days. It’s a drone footage showing the US Navy Blue Angels performing a flyover, with the drone flying way too close to the aircraft.

The video was shot on 12 May, while the military jets were performing the America Strong flyover in Detroit, Michigan. Considering that most drone cameras have wide-angle lenses, it appears that the drone is on a dangerous proximity to the jets. According to The Aviationist, the video was originally posted by Giovanni Lucia who goes by @giolucia on Instagram.

It hasn’t been confirmed whether Lucia is the one who actually filmed the video. However, at the time of writing this, both his Facebook and Instagram account are unavailable. The Aviationist reports that some of his social media posts show downtown Detroit at night, when flying a drone is forbidden. One of these photos includes a caption “Might of [sic] broke a couple FAA regulations today…”

Although Lucia’s social media accounts have obviously been deleted, Vic Moss of Moss Photography managed to download the video before they were removed. He reuploaded it to YouTube with a disclaimer that it’s not his video, adding that it was uploaded so that the link can be sent to authorities. “I download it from Mr. Lucia’s FB page before he took it down,” Moss writes. “This is the link that many have sent to different government agencies.”

In the video description, Moss adds:

“One of the most irresponsible, ignorant, reckless, moronic, outright dangerous things I’ve EVER seen with a drone. I hope the FAA, and the Navy come fry Mr. Giovanni Lucia butt.”

We’ve seen a number of cases when something similar happened. Heathrow and Gatwick airports both had to be shut down due to drone sighting, and the incidents happened only a few weeks apart. Under certain conditions, a collision between a drone and an airplane can be extremely dangerous. The FAA forbids flying around airports and near airplanes, and you can even go to jail if you break these rules. Therefore, if it gets proven that Lucia is the one behind this video, I believe that he’s up for a huge fine.