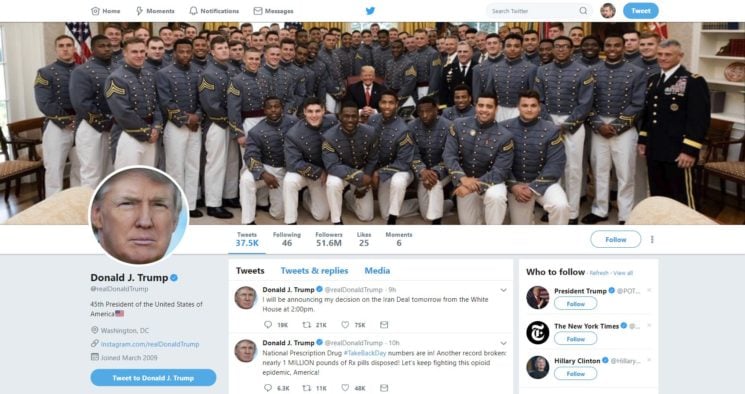 I came across this photo of US President Donald Trump today and I laughed so hard coffee was coming out of my nose.

Here we have the most powerful man in the world, surrounded by an entire squad of beefy manly dudes, and Trump looks like a tiny little muppet in the middle.

You’d think that a guy with a thing about the size of his tiny hands and a tough-guy caricature to maintain wouldn’t want to look like a helpless tiny Benjamin Button…yet this is the photo he (or his best people) liked enough to post as his Twitter banner.

OK – I know American politics are a little nutty – so as a community of photographers, lets just take a moment to analyse why Trump looks so funny in this photo, and how you can avoid it.

Never Use An Ultra Wide Angle Lens “To Get It All In”!

I’m American light (Canadian), so please excuse me if I’m wrong, but this photo looks like it was taken at the White House in the Oval Office with Trump seated at his desk and a group of 80 men surrounding him (by my count anyway).

If you’ve ever had a bridezilla insist that you have to get a group photo of her entire extended family twice removed, you can understand what kind of hell the photographer was going through.

Now I’ve never been to the White House (although fun fact: we did burn it down in the War of 1812), but judging from my experience binge watching House of Cards (and this fisheye Wikimedia photo), the Oval Office is not a big room. 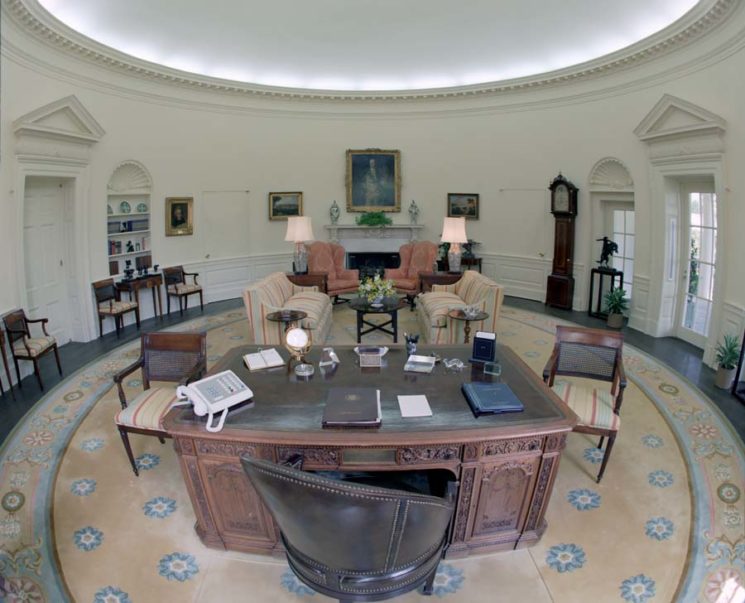 Looking at the photo in Trump’s Twitter banner, we can see that we have a row of men in line with the front of Trump’s desk stretching across the entire width of the room, with a large grouping in line behind them, and a small grouping of eight men in front of the desk.

By the looks of it, the photographer is standing on a couch, likely as far back as he can get before he hits the rear wall.

In order to quickly photograph a grouping this large in a setting this small, the only option the photographer has is to resort to an extreme wide angle lens – something in the range of 11 to 14mm by my eye.

You can see the wide angle lens distortion in the arms of the couch the photographer is standing on, and the angle of the vertical lines of the windows.

In this photo, Trump is maybe six to eight feet behind the guys in the front row. If you were shooting this at 35mm or maybe even 24mm, you probably wouldn’t notice. But when you’re at the ultra wide angle range – the amount of foreshortening (exaggeration of the size of the foreground relative to the background) leaves the most important person in the image (presumably Trump not the good looking guy front row, second from the left) looking like he is physically a fraction of the size of the guys closer to the camera.

The fact that he is sitting at his desk compounds the problem, because instead of simply being in the second row, he is the full width of his desk and his chair further away.

As a fellow photographer, I have to sympathize with the photographer to was forced into this situation and expected to magically produce an amazing group photo of 80 people in a tiny office.

I can almost hear the discussion with the White House PR staff:

White House PR Staff: “Ummmm, Mr. Trump has a tee time with President Snow, Lord Voldemort and Sauron in 5 minutes…you need to get this done now.”

Photographer: “Right….well…OK everyone, cut the chit-chat and lets all just get in a row around the President…hey could I get a few of you to maybe kneel up front here…”

Photographer: “Uhhhhh ya, I can’t quite fit everyone in, hang on, I need an extreme ultra wide to get it all in the frame *pulls out Canon EF 11-24mm f/4*, right, is it OK if I just back up and stand on this couch – it’s not a historic couch right?”

Photographer: “OK, OK…well remember, if you can’t see the camera, you won’t be in the photo…OK on three”

Group of Dudes: “WAIT – where’s Forest? Oh, Forest, he had to pee – I think he went to the bathroom. Ya, he’ll be back in a minute. Oh no, there he is, he’s just getting a selfie with Hannity behind the secret bookcase…yo Forest, get your ass in here or you’re not going to be in the photo with the Prez.”

Photographer: “SNAP…OK, OK, I got it, we’re good, thanks everyone, OK, there’s a decanter of scotch around here somewhere right?

Photographer: “Errrrr, ya, OK well, I’m sure the President is really going to love this photo, I’ll let you know when the proofs are ready.”

Options For Working With Large Groups

Large group photos never look good and they are always a royal (presidential?) pain in the a$$ to wrangle people into place – so your best option is to just say no.

Smaller groupings in multiple photos are always a much better option.

If you have no choice due to time (or your client’s insistence) and you do have to photograph a single large group, try to stand as far away as space will permit and use a longer lens (usually not a problem if you can move everyone outdoors).

If you’re stuck in a small room and have absolutely no choice, at least move the most important person in the photo to the front.

In this case, the President could have been standing in front of his desk with the front row kneeling in front. Of course, if you are dealing with a portly gentleman, you do also have to consider that the same foreshortening effect may exaggerate his girth if he is the closest person to the camera.

Is This Photo of Trump as Hilarious As I Think It Is?

To be honest, I can’t tell if the photographer was deliberately trolling Trump (as with Nadav Kander‘s image of Donald Trump for Time Magazine: Trump Trolled By Time – A Photographic Deconstruction of the Man of the Year 2016 Cover), or if they were just making due with a bad idea in the wrong location with an ornery client.

Either way, I think that Trump looks absolutely ridiculous in this photo, especially with his known size insecurities – it’s hard to believe that the photographer didn’t make a deliberate choice to portrait Trump as a sad little boy surrounded by men.

The fact that somebody at the White House (maybe even Trump himself), thought that this photo would make the perfect banner for Trump’s twitter account makes the joke even that much funnier.

I guess maybe they were just happy that someone actually showed up to meet with him?

But what do you think?

Am I just projecting my snowflake bias onto the President (are we still using snowflake? I don’t follow American right/left flame wars that closely, so please update with whatever derogatory name is current).

Or is the symbolism just too perfect to be a coincidence?

What do you think the photographer’s intention was with this image?

Please leave a comment below and share your thoughts! (also, please dont make this about politics, this is about lens selection)