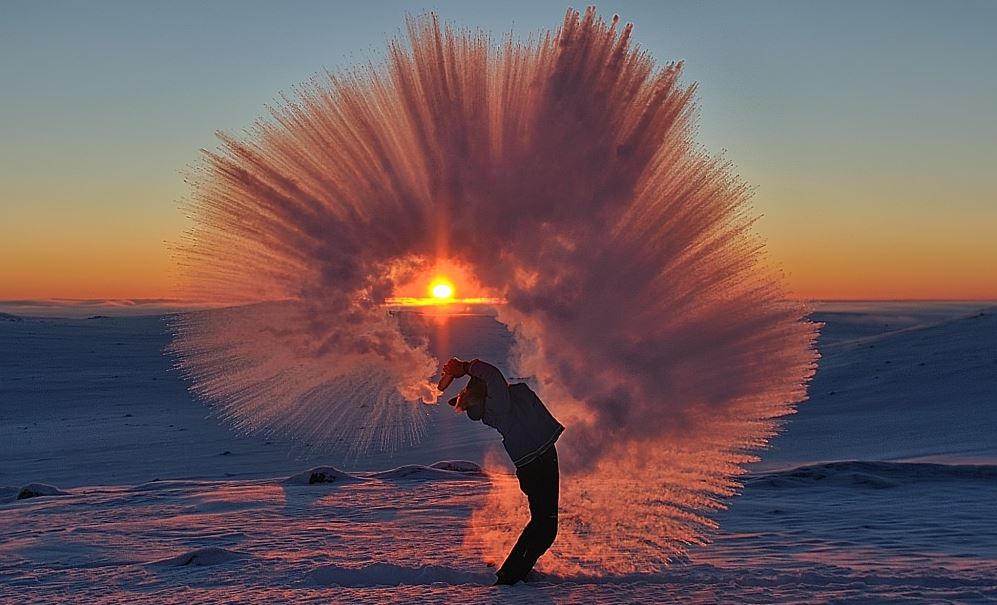 We’ve all seen those photos where a model in a pool or the ocean throws her hair back to create a beautiful splash, but I bet you’ve never seen the Arctic Circle version of it.

Equipped with a few tea-filled thermoses, and with science on his side, Photographer Michael Davies and his friend Markus headed out yesterday to create this perfectly timed photo.

The Mpemba effect basically states that hot water freezes faster than cold water. It is probably thanks to this, as well as the fact that he lives just 20 km south of the Arctic Circle, that Michael was able to capture this unique image.

With an ambient degree of -40°C and no wind, conditions in Pangnirtung Nunavut, Canada were just right for Michael to pull off his plan. According to Colossal, the area only gets two hours of sunlight each day during the winter months, so even the lighting posed somewhat of a challenge. A challenge that definitely paid off, though.

Michael shared some background info on the photo in an email to Colossal:

“Around 1pm I jumped on my skidoo along with my friend Markus and we drove 45 minutes to the top of a nearby mountain where the light (which is almost always pink near the solstice) would hit the hills. Prepared with multiple thermoses filled with tea, we began tossing the water and shooting. Nothing of this shot was to chance, I followed the temperature, watched for calm wind, and planned the shot and set it up. Even the sun in the middle of the spray was something I was hoping for, even though it’s impossible to control.”

Another great example of the Mpemba effect can be seen in the video below: